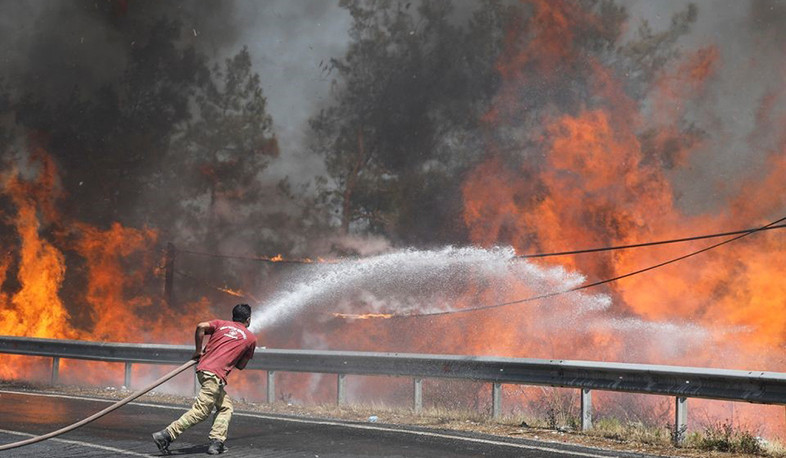 The death toll from six straight days of wildfires in Turkey has risen to eight, while in neighboring Greece, firefighters were attempting to contain a blaze that has destroyed houses and hospitalized more than a dozen people, Al Jazeera reports.

The Turkish fires have been fueled by a southern European heatwave fed by hot air from North Africa, which has also seen chaos grip other parts of the Mediterranean in recent days.

Experts have warned that climate change is increasing both the frequency and intensity of wildfires.

Prime Minister Kyriakos Mitsotakis warned on Monday that Greece is suffering its worst heatwave since 1987 as forecasters said temperatures could reach 45 degrees in the coming days.

The intense heat has helped fan wildfires that have destroyed more than 3,000 hectares (7,400 acres) of pine and olive groves in the country’s west since Saturday.

Elsewhere in Europe, more than 800 flare-ups were recorded over the weekend in Italy, mainly in the south, the country’s fire brigade said. A second straight day of wildfires in Sicily on Saturday forced people to leave their homes and saw the local Catania airport temporarily shut down.

In Spain, firefighters backed by waterbomber aircraft battled a wildfire that broke out Saturday near the San Juan reservoir, about 70km (40 miles) east of Madrid. That blaze was stabilized overnight but authorities urged people to stay away from the reservoir, a popular bathing spot for residents of the Spanish capital.

“There are climatic conditions being created which are so favorable for wildfires, that is why you are seeing all these incidents happening in the Mediterranean region,” Bhushan told Al Jazeera.

“And all of them can be linked to climate change.”