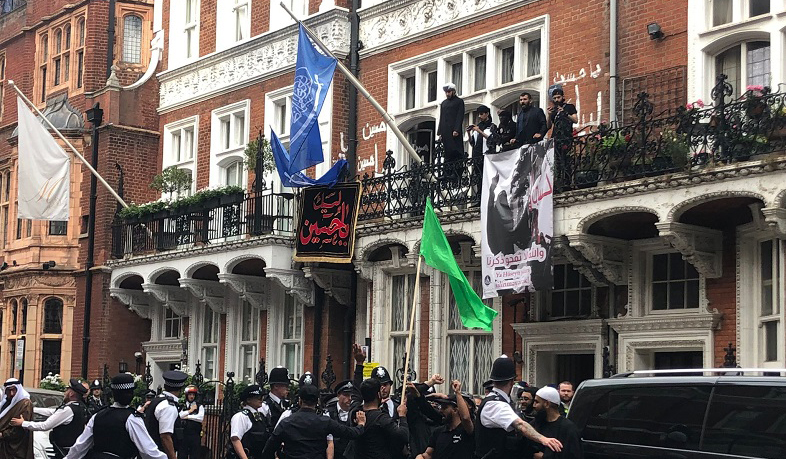 The protest at the Embassy of Azerbaijan in London yesterday, Thursday 4 August 2022, was carried out by supporters of The Mahdi Servants Union in opposition to the president of Azerbaijan, Ilham Aliyev and his government. This was stated in the press release published on the institution's official website.

“This government is responsible for longstanding heinous crimes and persecution against the rights of the population, in similarity to the methods of Erdogan of Turkey and Putin of Russia; to the extent of interfering in individual freedoms and personal and private affairs of the population.

The last straw was in recent days with the persecution of a woman who was abused and harassed for only writing the name of the holy figure and iconic symbol of freedom, Imam Hussain (peace be upon him), on the wall of her own house.

A figure who has been commemorated by the Azerbaijani population for centuries during the Muharram period, as part of their rich religious and cultural heritage.

The Mehdi Servants Union supports such protests that express the need for urgent action by the global community to be taken to safeguard and protect Shia peoples around the world and grant them their basic right of freedom of religion.

While the Union supports protesters expressing legitimate and urgent grievances, at the same time, it calls for people to respect the law. The Union also emphasises that it is difficult to blame people for their anger over oppression done unto women and children at the hands of a dictator,” the statement reads.