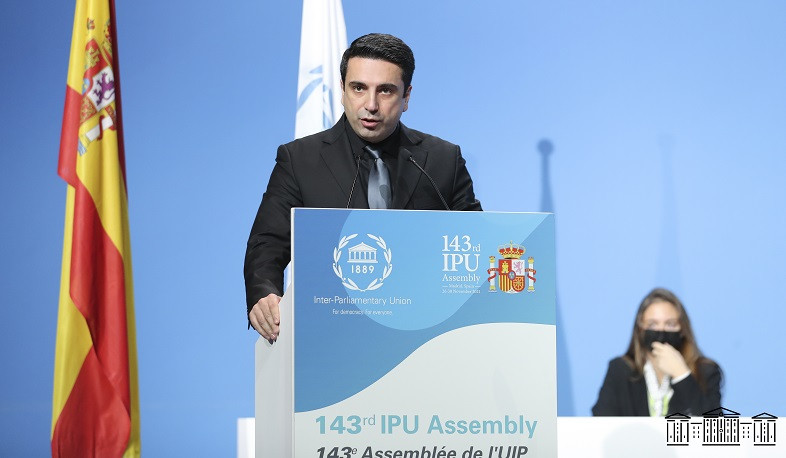 The delegation led by the President of the RA National Assembly Alen Simonyan took part in the 143rd Assembly of the Inter-Parliamentary Union being held under the auspices of Parliament of Spain.
At November 28 meeting, the RA NA President delivered a speech. He thanked his Spanish colleagues for the excellent organization of the IPU Assembly after two years of break and for the warm hospitality. The Speaker of Parliament has noted that over the recent years Armenia and its people have been facing numerous domestic and external challenges. Alen Simonyan has underlined that after the Velvet revolution in 2018 the Armenian government over the recent years has initiated wide multi-sectoral reforms for the benefit of democratic values and principles. He has stressed that democracy in Armenia has no alternative. The President of the National Assembly considered one of the serious challenges to the democratic development is the danger of destabilization and regional conflicts.
Touching upon the 44-day war Nagorno-Karabakh unleashed by Azerbaijan, the NA President highlighted the necessity of finding solution to the Nagorno-Karabakh conflict within the framework of the OSCE Minsk Group Co-Chairs. In the context of the presentation of the post-war events, Alen Simonyan reminded the attendees about the meeting of the Prime Minister of Armenia and President of Azerbaijan two days ago where the ways to stabilize the situation were discussed – to unblock all transportation and communication links and to solve all humanitarian issues, including the return of Armenian prisoners of war and other detained persons. He drew the attention of his colleagues to the need of an honest dialogue, in case of which all problems could be solved without resorting to the use of force. The Head of the legislative body has considered one of the major contemporary challenges of democracy remains corruption, adding that the fight against it is one of the main priorities in Armenia.
In his speech the NA President also referred to the issues of youth, the freedom of media in Armenia and the women’s rights.
Concluding his statement, the RA NA President has stressed that in our fast-changing modern world, we have to join our efforts to withstand all challenges. The agenda main theses of the voiced speeches, discussions are built around contemporary challenges of democracy. The goal of the Assembly is to expand the opportunities of communication for the members of the Inter-Parliamentary Union, promoting the development of the inter-parliamentary relations.
During the previous two days of the Assembly the delegates reflected upon the ease of public trust towards the political systems, the polarization via social network and the functions and the crucial role of parliaments in spreading disinformation.
The parliamentarians exchanged ideas on the effective cooperation with the society, the inclusiveness of the decision-making process and representation. More than 120 member states are included in the Inter-Parliamentary Union. It was designed to adopt the new strategy of the Inter-Parliamentary Union for 2022-2026. It has an aim to reorient the Inter-Parliamentary Union in the spheres, where it can have great impact, and where there is need for parliamentary toolset. The strategy defines the following political priorities: means of fight for climate change, democracy, human rights and gender equality, peace and security, sustainable development.
Views 2034