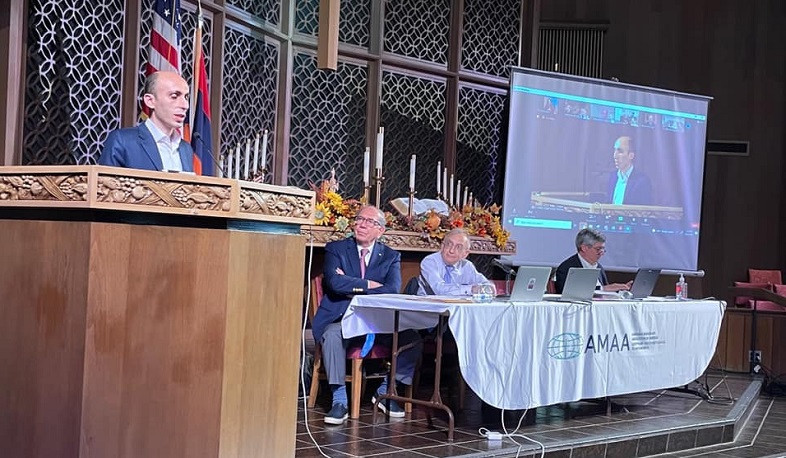 People of Artsakh are determined to live in their own Homeland: Artak Beglaryan

On October 23, State Minister of the Republic of Artsakh (Nagorno-Karabakh) Artak Beglaryan participated in the annual meeting and charity dinner of the Armenian Evangelical Association of America in Fresno, USA, and delivered a special message, Facebook page of Artsakh’s Government reports.

The State Minister praised the Association’s decades-long charitable activity in Artsakh, considering it needed and effective, especially in the social and educational spheres. Artak Beglaryan presented in detail the current political and humanitarian situation in Artsakh, as well as future-oriented approaches and programs.

The State Minister emphasized the weighty role of the Diaspora in the past of Artsakh, expressing confidence that the joint efforts of all Armenians for the future restoration and development will continue. He noted that the expectations from the Diaspora are not so much material, but in the form of human capital, which can create serious opportunities for the long-term development and strengthening of the Homeland.

Artak Beglaryan stressed that the people of Artsakh are determined to live and create in their own Homeland, noting that despite a long and difficult struggle, it will be possible to reach a final settlement of the Azerbaijani-Karabakh conflict and international recognition of Artsakh’s independence.

Zaven Khanjian, Executive Director of the Armenian Evangelical Association of America, stressed in his speech that they will expand the programs implemented in Artsakh, directing the significant amount of money collected especially to the fulfilment of social and educational needs.