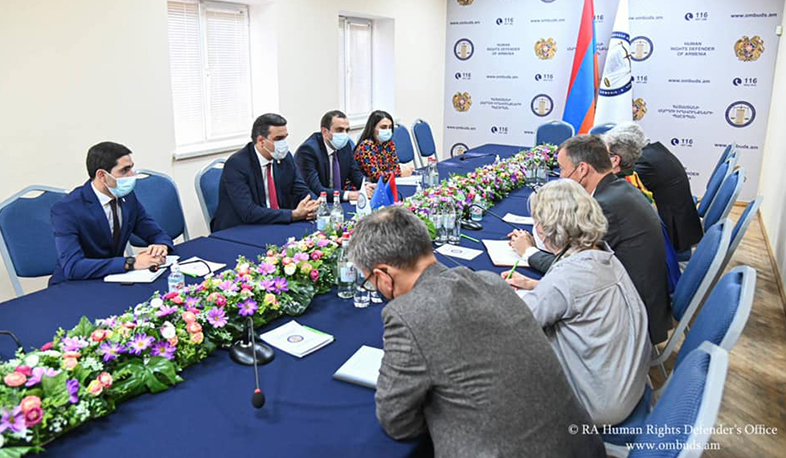 On September 14, Armenian Ombudsman Arman Tatoyan met with the delegation headed by the EU Special Representative for the South Caucasus and the Crisis in Georgia Toivo Klaar. The meeting was also attended by the Head of the EU delegation to Armenia, the EU Ambassador, Mrs. Andrea Wiktorin.

"I presented the facts of violation of Armenian border residents’ rights by the Azerbaijani authorities at the post-war period. I mentioned that it is wrong to view the issues related to the state border of Armenia only from a military-political point of view, because human rights become secondary and the chances of defending them are limited.

As an Armenian Ombudsman, I mentioned that as a result of Azerbaijan’s illegal actions, people lost even their homes, land plots, hayfields belonging to them since the Soviet times. Because of that not only social, but also serious security issues have emerged.

The illegal presence of the Azerbaijani military on the sovereign territory of Armenia, for example, on the Black Lake, has created very serious security problems for the nearby settlements - they became targets and Azerbaijani soldiers fire shots sometimes.

In addition, some people cannot continue cattle breeding, which is the main source of income for their families. In Gegharkunik province, large and small cattle cannot be kept in stables near pastures, cannot have water or graze in some places - access to water resources is under threat not only in Syunik, but also in Gegharkunik province. More than that, a number of villages have no water at all.

I presented the incidents that occurred during one of my recent visits to Syunik, when I personally witnessed how the Azerbaijani servicemen’ presence on the roads between Syunik communities violates people's rights for life and free movement.

In particular, on the way to Yerevan from Syunik, we stopped for couple of minutes on M2 interstate road, on that section where Azerbaijani armed servicemen are positioned.

We were trying to figure out what will happen if for some real reason, let’s say, because of car’s malfunction or if a passenger feels sick, and the civilian car stops on that section. As soon as the Azerbaijani military servicemen noticed the parked civilian cars, they immediately rushed into the building (house) and came out with a machine gun in their hands, aiming at us.

I emphasized that only the border demarcation with Azerbaijan without the creation of a buffer zone, without the removal of Azerbaijani servicemen, their road signs and cameras, not only will not ensure the rights of Armenia’s citizens and especially Armenian border residents, but will become a cause for new violations of rights and new tensions.

During the meeting, I highly appreciated the cooperation with the EU delegation to Armenia, the important role of the Ambassador Andrea Wiktorin personally - for human rights protection and promotion in Armenia", Tatoyan wrote on his Facebook page.