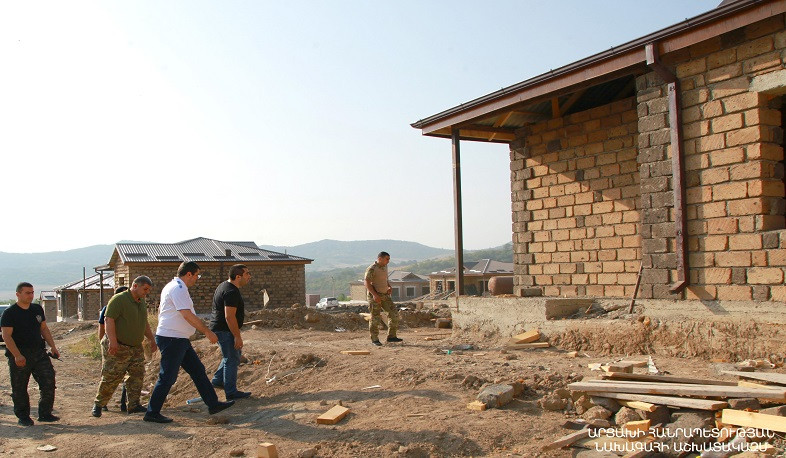 On September 1, President of the Artsakh Republic (Nagorno-Karabakh) Arayik Harutyunyan paid a working visit to the Askeran region.

The head of state got acquainted with the construction of a pipeline leading from the Patara River to the water supply system of the capital Stepanakert to provide the residents of Stepanakert with drinking water around the clock in drought conditions, which is planned to be completed in June 2022.

The President of the Republic of Artsakh, together with the Minister of Urban Development Aram Sargsyan and other representatives of the sphere, discussed issues related to the construction of the Patara Reservoir, the largest and most important economic project of the republic. The implementation of the project will finally solve the issue of water supply in the capital Stepanakert, as well as a number of communities in the Askeran region will be provided with drinking and irrigation water. In this regard, the President instructed to complete the preparations as soon as possible and start the active construction phase.

Then, Arayik Harutyunyan visited the construction site of a new settlement of more than 644 thousand square meters under construction for the residents displaced from the villages of the upper sub-region of Askeran region due to the war in the administrative area of ​​Astghashen community, where he followed the large-scale construction process.

The President of the Republic of Artsakh also visited Ivanyan community, where he got acquainted with the construction works of two residential districts financed by the ‘Hayastan’ All-Armenian Fund. Both districts are planned to be put into operation in 2022, their residents will be provided with all infrastructural facilities.

During the visit, President Harutyunyan also visited Hovsepavan community, where he monitored the construction of about 92 private houses for the families of the victims of the third Artsakh war and for the displaced residents. The construction of the district is carried out with the help of Russian philanthropist Sergey Hambardzumyan.

Assessing the progress of the work as satisfactory, the President of the country greatly highlighted the importance of the housing construction programs implemented in Artsakh, emphasizing that over time it will be possible to alleviate the complicated socio-economic and humanitarian situation created by the war.