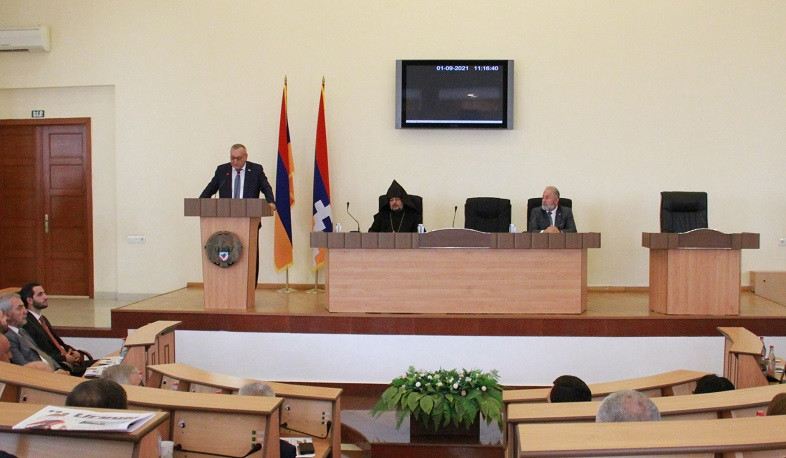 On September, the Parliament of Artsakh (Nagorno-Karabakh) convened a special session chaired by Speaker Artur Tovmasyan dedicated to the 30th anniversary of the declaration of independence of Nagorno-Karabakh Republic.

The Primate of the Diocese of Artsakh Bishop Vrtanes Abrahamyan, the former Speaker of Parliament of Artsakh Ashot Ghulyan and an Armenian parliamentary delegation led by Vice Speaker Ruben Rubinyan attended the session.

The parliament observed a moment of silence in honor of the victims of the three Karabakh wars.

Speaker Tovmasyan said the Azerbaijani-launched wars against Artsakh in 2016 and 2020, with the latter also involving international terrorist groups, reaffirmed Azerbaijan’s explicit sinister intentions of an “Artsakh without Armenians”. “And after all this, to include any contentious issue of some kind of a status within Azerbaijan into the negotiations process simply doesn’t fit into any healthy logic.

Despite entirely different positions around the settlement of the Karabakh conflict between the sides, we are definitely inclined towards the establishment of a proper environment aimed at continuing the negotiations process exclusively under the auspices of the OSCE Minsk Group.”

“Independence isn’t only a declaration, it isn’t only a Constitution, first of all it is the dignity to live independently,” said Bishop Abrahamyan in his remarks.

In turn, Artsakh Foreign Minister Davit Babayan said: “This holiday is first of all the holiday of our fallen heroes, who sacrificed their lives for us to have our Homeland. We are all obliged to strengthen Artsakh, which will mean to strengthen Armenia, for their memory.”

Babayan said that the priority for all Armenians must become the focusing on Artsakh.

Vice Speaker of Parliament of Armenia Ruben Rubinyan conveyed the greetings of Speaker Alen Simonyan, and described the Artsakh Declaration of Independence as the only way of preserving the existence of Armenians of Artsakh.

In turn, ‘Hayastan’ (Armenia) faction MP Armen Rustamyan said: “It is important that we celebrate this day. This is a message to our neighbors: the will of the Armenians is unbreakable, regardless of turmoil we are able to rediscover ourselves and overcome challenges. We are in a common system. The security of Armenia is interlinked with Artsakh. We have very little time to accurately assess the situation and restore what has been lost.”

“The future of our people was determined, is determined and will be determined in Artsakh,” said MP Artur Vanetsyan from the ‘Pativ Unem’ (I have the honor) bloc.

“The future of our people has been decided, is being decided and will be decided in Artsakh. A torn but vibrant Artsakh will rebuild itself and become stronger. We will spare no effort to raise the issue of Artsakh's right to self-determination and the de-occupation of the occupied territories in international instances,” he said.