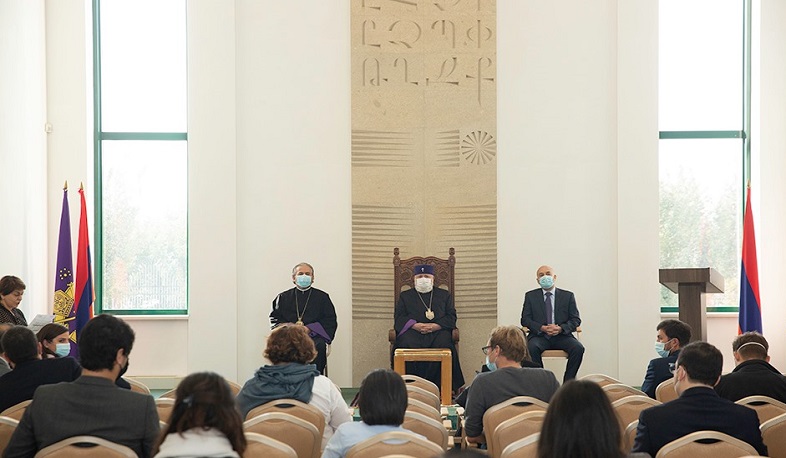 On November 1, at Mother See of Holy Etchmiadzin, Karekin II, Catholicos of All Armenians, received the delegation of the "European Youth for the Recognition of Artsakh’s Independence" initiative, headed by the Armenian General Benevolent Union (AGBU) members.

At the beginning of the meeting, Mrs. Nadia Gortzounian, head of the AGBU European and French body, introduced the delegation to the Catholicos of All Armenians as well as the purpose of the visit to Armenia. The delegation consisted of about 30 Armenian and foreign members from 15 European countries and Russia, including journalists and politicians.

Welcoming the Armenian and foreign guests in the Mother See of Holy Etchmiadzin, His Holiness gratefully blessed the delegation members who arrived in Armenia to express their support to the Armenian people during the unleashed war against Artsakh, and to draw the attention of their countries to the struggle for the protection of the right of the Armenians of Artsakh to a free and independent life․

His Holiness expressed his appreciation for another patriotic initiative carried out by the AGBU, emphasizing the importance of national solidarity in these hard days, and all the steps aimed at raising awareness around the world about the struggle for justice and Artsakh self-determination.

The Catholicos of All Armenians stressed that those present have a mission to present to the international community in the true light the challenges that the Armenians of Artsakh are going through due to the will to live freely and independently. Their mission is to present the destruction, pain and suffering caused by the Azerbaijani armed forces and mercenary terrorists with the support of Turkey, targeting the civilian population, settlements, medical, cultural and religious institutions and structures.

His Holiness reaffirmed that this struggle of the Armenian people is a struggle for the preservation of dignity and existence. His Holiness noted that the only way to protect the right of a free life of the people of Artsakh is the international recognition of Artsakh. In this regard, the Armenian Patriarch emphasized the efforts of the international community, in particular the OSCE Minsk Group Co-Chairs, to suspend hostilities and resolve the conflict through peaceful negotiations.

His Holiness praised the support events organized in different communities of the Diaspora in recent weeks, reiterating the importance to unite our people around the world around this battle to the death.

During the meeting Anouch Toranian, Deputy Mayor of Paris and Executive Director of AGBU France expressed the support of the City Hall of Paris and the friendly French people. His Holiness responded with gratitude and mutual wishes.

The Catholicos of All Armenians answered the questions about the steps taken by the Armenian Church, in particular, about the spiritual support to the families of wounded or killed soldiers, to the service of the regiments on the front, the provision of shelters for displaced Artsakh people, and general support to Artsakh.