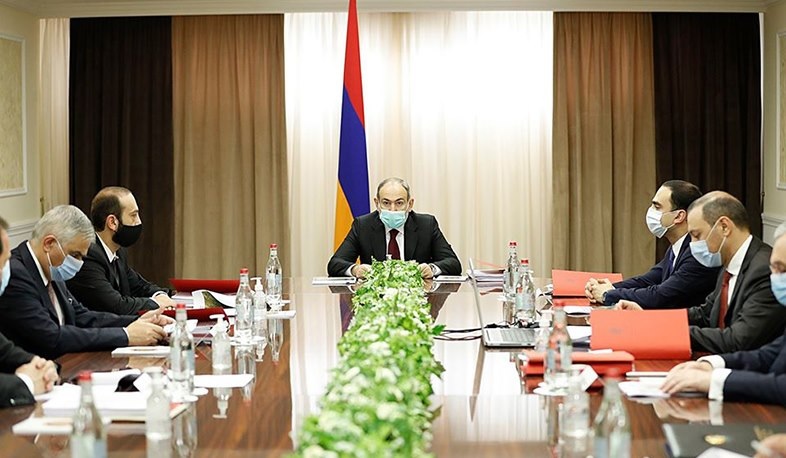 The Security Council of the Republic of Armenia is holding a regular meeting in Yerevan, chaired by Prime Minister Nikol Pashinyan. The meeting shall approve Armenia’s National Security Strategy, in addition to discussing other security-related issues. In that context, Prime Minister Pashinyan delivered a message, in which he stated:

Extremely important issues are on the agenda of today’s Security Council meeting, but I would like to single out the National Security Strategy of the Republic of Armenia. I think we have got a pretty good draft strategy in terms of both the original text and the general context.

Our nation has existed for several millennia, though being Armenian did not mean the same thing during this time. The meaning of the term has changed over time due to various circumstances, events, and factors.

We do not now know whether the Armenians who lived 2000 years ago viewed their actions from the perspective of our present interests, we do not know at all whether there was such a process of thought or not. But now we can do that, knowing the past, thinking not only about the present and the future, but also about the millennial horizon.

Perhaps this is the turning point where the national ideology becomes a vital necessity, an institution of practical significance, when based on our past and present experience, we are facing the task of not only formulating what needs to be done today, but also sending such a fundamental message that would liaise between the future generations of Armenians and the Armenian who lived a thousand years ago. This is our vision of developing national identity and consciousness. National identity develops on the basis of our history, those positive and negative impressions we draw from past experiences, as well as on our vision of the future, which is organically connected with the past and the present.

Our national identity has evolved over the years so that today we can formulate our goal, which is to ensure the future generations’ survival and normal development on the planet Earth for several millennia ahead in the territory of the state of Armenia and think of what we should do today.

An Armenian that will live in 2000 years will not look the way we do today just as we are not acting the way our ancestors did 2000 years ago. But unlike those who lived 2,000 years ago, we can send a message to the future generations of Armenians that should bridge them with the past, and the main point of that message is what needs to be done in order to strengthen and make that connection viable.

On the other hand, that interconnectivity should not be deemed as a bond. It should not pull us back, but push forward, stimulate and inspire for ever new achievements, it should not become an overwhelming presence, but it should encourage every Armenian to feel part of our millennial mission, become part of that mission, expand the scope and enrich the content of that mission through deeper knowledge of our identity.

This is why I consider it important to draw such a line in the foreword to the National Security Strategy, which is formulated below. In this context, I would like to quote Vahan Teryan’s famous lines:

Babylon used to be our enemy, but see

The Armenian people boast the ability of defying historical disasters; we have reached the 21st century thanks to the skills and qualities we have developed on the way to building our own statehood. The awareness of these historical facts helped us reinstate our sovereignty immediately after the Medz Yeghern.

The national values of the Armenian people are as follows:

- Armenian statehood, citizenship of the Republic of Armenia;

- The history and folklore of the Armenian people: our epic, beliefs, legends, and myths;

- The pan-Armenian potential, the Armenian Diaspora;

- Armenia’s nature and wildlife with its biodiversity;

- Armenian cuisine, all the samples of material and intangible heritage that express, depict, describe or symbolize the aforementioned national values;

The national goals of the Armenian people are as follows:

- International recognition of Artsakh’s right to self-determination without any restrictions;

- International recognition of the Armenian Genocide, overcoming and eliminating its consequences;

- Ensuring security, freedom and well-being for the citizens of the Republic of Armenia, as well as protecting and promoting other fundamental rights;

- Equality before the law, equality of men and women, equal access for men and women to opportunities available in public, state and economic life, as well as achieving national unity and cohesion through strict enforcement of civic rights and duties;

- Preservation and development of our national and sovereign identity by safeguarding the independence and sovereignty of the Armenian people, including the restoration and development of national identity among those Armenians who have lost, or who seem to be on the verge of giving up their ethnic self-consciousness, including the knowledge of language;

- Mobilization of the pan-Armenian potential in a bid to preserve and develop our national values and achieve our national goals;

1. Violence must be ruled out in dealing with domestic issues. Any such social group or individuals that view violence as a medium for addressing internal problems must be rejected. The vision of a non-violent society free of violence must become the cornerstone of our national unity. Indeed, this does not apply to the use of legitimate force with a view to preventing and exposing crimes, ensuring the normal life of society, as well as protecting the homeland from external aggression.

4. Armenia and Artsakh should be free from all forms of corruption, including sponsorship and artificial monopolies, no man-made barriers to free competition should be created and the material damage inflicted on the state and the people through corruption must be repaired.

5. The rule of law, equality before the law through the exercise of civic rights and duties must become the core of intra-national relations.

A judicial system exposed to external or internal influences is a threat to national security. The law-courts must be independent.

The existence of a privileged class, circle, and individual in the sphere of economy, politics and public life must be ruled out.

6. The negotiations on the settlement of the Artsakh issue should seek to safeguard the results of the liberation war waged to ensure the self-determination and security of the people of Artsakh. Any solution agreed upon by the governments of Armenia and Artsakh cannot be considered acceptable unless it gets popular support and approval in Armenia and Artsakh.

We and the World

Promoting dialogue among civilizations, peoples, States and multilateral relations should be the reflection of our commitment to promoting international peace and stability. Armenia stands ready to become a platform for such dialogue. That is so much as a message.

To objectively formulate what I mean by saying the will of the Armenian people and how it should be expressed in daily life, my understanding is that the popular will is formed at the crossroads of civic rights and duties, when the citizens of the Republic of Armenia and the Armenian people, as a whole, have the opportunity to simultaneously exercise their rights and duties. The Armenian state is to be underpinned by the synergy of these two concepts. I think it is a key feature, and I do believe that it should be enshrined in the text and concept of the National Security Strategy because, as we have mentioned on many occasions before, the existence of the Armenian statehood, as well as, unfortunately, its absence was often due to favorable or unfavorable geopolitical circumstances.

Our primary task is to get the Armenian nation out of that vicious cycle where geopolitical factors can predetermine the fate of our statehood. Our statehood should be dependant on the collective will of the Armenian people.

And, in fact, with this National Security Strategy, we are setting a new bar for ourselves. But I want to say that this is not so much a bar, but it would be more correct to call it a bar, because it imposes a proportionate responsibility on each of us, starting with senior officials and ending with ordinary citizens. The survival of the Armenian statehood depends on our will to bear that responsibility and exercise our rights, and I am convinced that as a nation, we are actually prepared to take on this responsibility today.

I am glad that as a government, as a security council, we have the required mandate to formulate such willingness and make a daily work of it. Thank you. This was my foreword”.