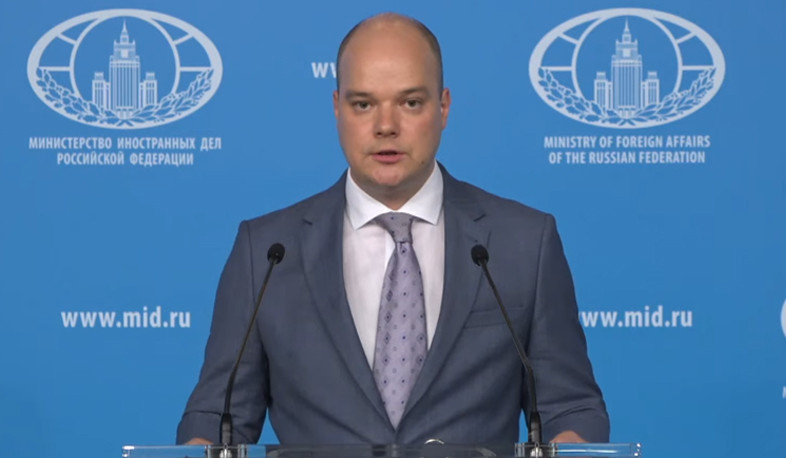 Situation around Lachin Corridor should be settled in accordance with statement of November 9, 2020: Russian Foreign Ministry

The situation in the South Caucasus is in the center of Russia's attention. Deputy Director of the Information and Press Department of the Russian Foreign Ministry Ivan Nechayev said this during a briefing in response to the question of ‘Lurer’.

"On August 4, the Russian Foreign Ministry made a statement regarding the escalation of the situation in the Nagorno-Karabakh conflict zone, calling on both sides to show restraint and maintain the ceasefire regime. We reaffirm the necessity to regulate all issues in accordance with statement of the heads of Russia, Azerbaijan and Armenia on November 9, 2022, January 11 and November 26, 2021. This also applies to the situation of the Lachine Corridor, which should be settled on the basis of paragraph 6 of the trilateral statement of November 9, 2020. It stipulates that with the agreement of the parties, in the next three years, the plan for the construction of a new route through the Lachin Corridor connecting Nagorno-Karabakh and Armenia should be decided, which should be followed by the redeployment of the Russian peacekeeping mission to protect this route,” Nechayev said.

The diplomat noted that the Russian side is in constant contact with the Armenian and Azerbaijani sides. Nechayev recalled Russian President Vladimir Putin's telephone conversations with Armenian Prime Minister Nikol Pashinyan on August 2 and 8, as well as Russian Foreign Minister Sergey Lavrov's and Defense Minister Sergey Shoigu's contacts with their Armenian and Azerbaijani counterparts.

“All the above-mentioned issues, including the issue of the Lachin Corridor, are the subject of consultations in order to find solutions that satisfy the Azerbaijani and Armenian sides,” said the diplomat, noting that he could not reveal the details of the discussions.

Referring to the activities of the Russian peacekeeping mission, Nechayev noted that some criticisms about peacekeepers are not fair.