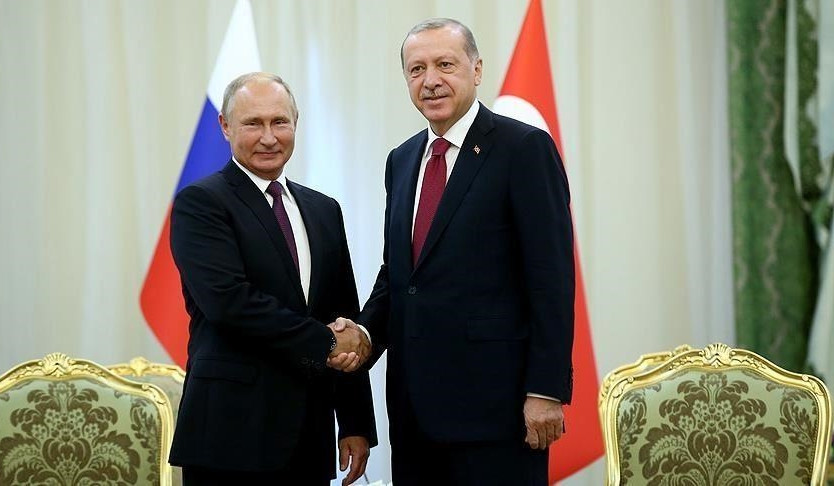 President of Russia Vladimir Putin: Mr President, my dear friend, we are delighted to welcome you to Russia.

As we agreed in Tehran, we are holding our next working meeting today. But before our meeting here in Sochi, a representative delegation of the Russian Government’s economic bloc visited Turkey at your invitation and addressed all the essential areas of our cooperation together with their colleagues. There are many of them. I can only remind you that last year our trade grew 57 percent, and it doubled in the first few months of this year, from January to May).

We have large projects we are working on. Everybody knows about the construction of the Akkuyu Nuclear Power Plant. This is energy, which is very important, but there are other areas as well. In this regard, I would like to note that TurkStream, the construction of which we completed some time ago, is today one of the most important routes for supplying Europe with Russian gas. TurkStream, unlike all other directions of our hydrocarbon supplies to Europe, is operating well, smoothly, and without failure. I do not mean only deliveries to consumers in Turkey, but, let me repeat, also to consumers in Europe.

I believe that our European partners should be grateful to Turkey for ensuring the continuous transit of gas to their markets.

However, oil, gas, coal, and other goods for Turkey’s consumption are supplied in large quantities, without failure.

The problem of Ukrainian grain exports through Black Sea ports has been settled thanks to your personal involvement and the UN Secretariat’s mediation. Grain is being exported, and I would like to thank you for that and also for the simultaneous adoption of a package decision on the unhindered delivery of Russian food and fertilisers to global markets, because this matter concerns many countries, especially developing countries, which are facing major problems with food and fertiliser deliveries. The decisions that have been taken thanks to your personal contribution are extremely important for all these countries. I would like to thank you for that.

As we agreed, I hope that today we will sign a relevant memorandum on the further development of our trade and economic ties with due regard for the arrangements our delegations reached in Turkey barely a day, or two days ago.

We are very happy to see you. Welcome.

Of course, we will also discuss the issues we have been dealing with for a long time, namely, regional security and above all, the Syrian crisis. Turkey and Russia have made a great contribution to normalisation here, and we will also devote time to that issue.

President of the Republic of Turkiye Recep Tayyip Erdogan (via interpreter): Mr President, I am grateful to you as well. Thank you. I am delighted that we are meeting again so soon after our meeting in Tehran.

Our delegations have met, and their meetings were very productive. They concerned the economy, trade and all other areas. They discussed many issues in these areas, and we can say now, following those discussions, that we can draw a line here.