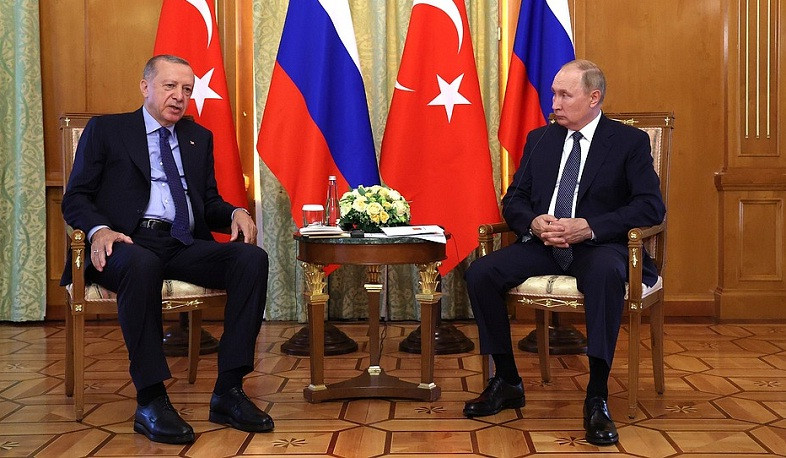 Vladimir Putin and Recep Erdogan issued a statement on their negotiations, finished in Sochi, Russia on August 5.
Ongoing regional and global challenges notwithstanding, the two Leaders reaffirmed their common will to further Turkey-Russia relations based on mutual respect, recognition of reciprocal interests, and in accordance with their international undertakings, the Russian Foreign Ministry announced.
“Within the framework of this understanding, the Leaders, who conducted extensive consultations on the issues that are on the agenda of Türkiye-Russia bilateral affairs, agreed:
With regard to regional matters, the Leaders stressed the key importance of genuine, frank and trust-based relations between Türkiye and Russia, to achieve regional and international stability.
Within this framework, the two Leaders acknowledged the role that constructive relations between the two countries played in the conclusion of the Initiative on the safe transportation of grain and foodstuffs from Ukrainian ports. The two Leaders underscored the need to ensure, in letter and in spirit, the full implementation of the Istanbul agreement, including the unimpeded export of Russia’s grain, fertilizer and raw materials stocks needed for its production.
In the meeting, where recent developments in Syria were also discussed, the Leaders underlined the importance they attribute to the furtherance of the political process. Stressing the significance they attach to the preservation of Syria’s political unity and territorial integrity, the Leaders reaffirmed their determination to act in coordination and solidarity in the fight against all terrorist organizations.
The two leaders emphasized their strong commitment to #Libya’s sovereignty, territorial integrity and national unity. They went on to underscore the importance of holding free, fair and credible elections based on the widest consensus possible and reiterated their support to the political process which continues under Libyan ownership and leadership”, said the statement.
The Leaders agreed to hold the next meeting of Tukey-Russia High Level Cooperation Council in Turkey.
Views 2963