Eduard Aghajanyan meets with members of delegation led by Deputy State Secretary, MFA of the Republic of Latvia Andzejs Vilumsons 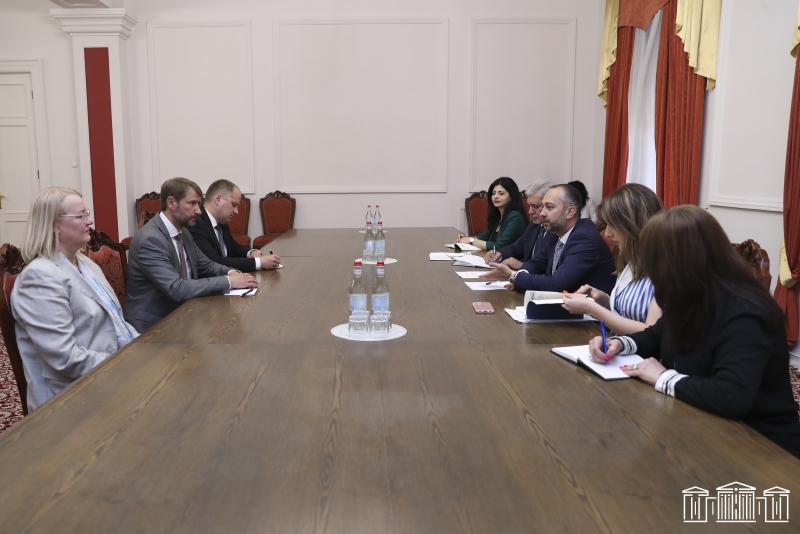 Welcoming the guests in parliament Eduard Aghajanyan noted that Armenia highly appreciates the relations with Latvia as an important partner in Europe, based on shared democratic values, as well as mutual respect and sympathy between our peoples. “We are committed to deepen and expand the mutually beneficial interstate cooperation with Latvia in all areas of common interest,” the Committee Chair said, expressing hope that the visit of the delegation will promote the development of relations between the two countries.

Andzejs Vilumsons thanked Eduard Aghajanyan for the warm reception. “After lasting period this is my second visit to Armenia, and I am deeply impressed by the development in such growth. Yerevan has become much more beautiful,” the Deputy State Secretary, MFA of the Republic of Latvia Andzejs Vilumsons said. He noted that the direct contacts will give new breath to the inter-parliamentary cooperation for the discussion of bilateral interest.

Eduard Aghajanyan noted that after the velvet revolution in 2018 the steps undertaken in strengthening the democratic values in Armenia, as well as fight against corruption are noticeable.

Referring to the 44-day war and the humanitarian consequences stemming from it, the Committee Chair stressed the issues of the repatriation of prisoners of war and other held persons in Azerbaijan and the protection of the cultural heritage of Artsakh.

The sides discussed the relations with the EU counties and issues on preservation of security in the region.