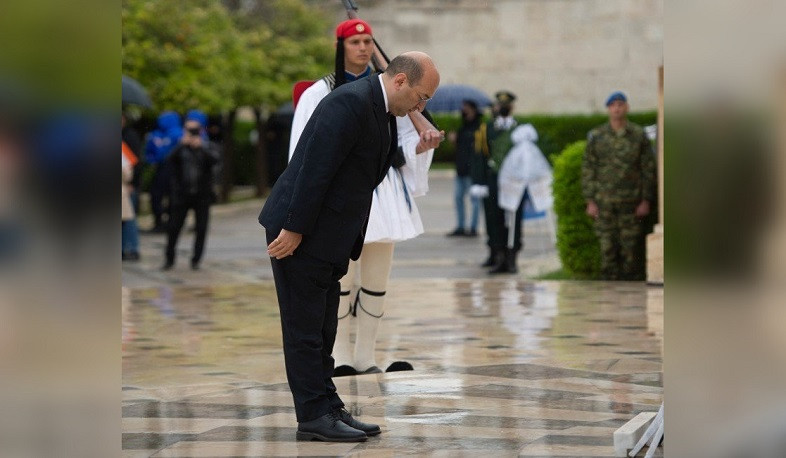 Pontic Greek Genocide carried out in parallel with and in continuation of Armenian Genocide: Ambassador

Ambassador of Armenia to Greece Tigran Mkrtchyan issued a statement on the occasion of the remembrance day of the genocide of Greeks of Pontus and Asia Minor.

The Ambassador published the statement on social media.

The genocide of Greeks of Pontus and Asia Minor was pre-planned by Young Turks and has been perpetrated in parallel with and in continuation of the Armenian Genocide. More than 350,000 Pontic Greeks fell victim to the Pontic Greek Genocide, which was perpetrated in 1916-1923.

Memory and the commemoration of victims are the best ways of perpetuating the memory of the Genocide victims. On March 24, 2015, the Parliament of Armenia unanimously adopted a statement condemning the genocide of Pontic Greeks and Assyrians in the Ottoman Empire, by saying a decisive “no” to Turkish denialism and the genocide and a decisive “yes” to the international recognition and condemnation of that genocide.

The final goal of the fight for the recognition of the Armenian Genocide, the genocide of Pontic Greeks and Assyrians by the international community is the restoration of justice, as well as the prevention of such crimes. Unfortunately, ethnic cleansings in different parts of the world do not stop. Just two years ago Armenians living in Artsakh were again subject to ethnic cleansing as a result of Azerbaijan’s genocidal policy.

In order to put the slogan “Never Again” into practice, it is necessary to unite the potential of Armenians and all friends of the Armenian people, as well as to decisively and undoubtedly condemn the rhetoric leading to hatred and creating a genocidal atmosphere.

We remember and bow”, the Armenian Ambassador said.