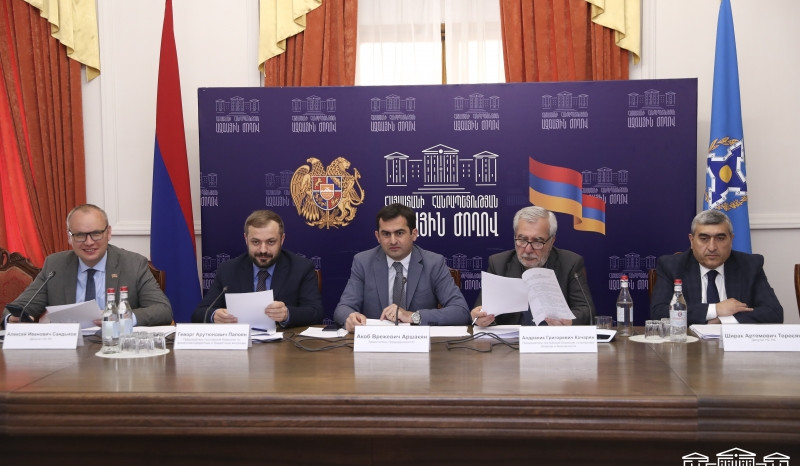 On May 17, the RA NA Vice President Hakob Arshakyan took part in the joint extraordinary session of the CSTO PA Standing Committees on Political Affairs and International Cooperation, on Defence and Security and on Socioeconomic and Legal Affairs via videoconferencing.

The members of the RA NA delegation to the CSTO PA Andranik Kocharyan, Gevorg Papoyan, Aleksey Sandikov and Shirak Torosyan also took part in the session.

Welcoming the participants, Hakob Arshakyan expressed conviction that during the session effective work will be done.

The NA Vice President touched upon the CSTO Jubilee Summit held in Moscow, which was dedicated to the 30th anniversary of signing of the Collective Security Treaty and the 20th anniversary of the Collective Security Treaty Organization. As Hakob Arshakyan has assessed, during the Summit the heads of the countries discussed in detail the problems of the organization, referred to the achievements and omissions, as well as outlined the further steps.

“I think that we’ll remain faithful to the same benchmark, and the existing agreements will increase our joint efforts of filling in with concrete content the real contribution of the CSTO Parliamentary Assembly in strengthening and expanding the multi-lateral cooperation of our countries in the Organization,” the Deputy Speaker of Parliament underscored.

During the session the joint steps against the international terrorism, the perspectives of the PA activities in 2021-2025 and other agenda items.

During the discussion of the item of the application of Parliament of the Arab Republic of Syria to the Parliamentary Assembly and giving an observer’s status to this state in the CSTO PA, the RA NA Vice President Hakob Arshakyan reaffirmed the position of the Armenian side connected with that, noting that the RA National Assembly has no objections in that issue.