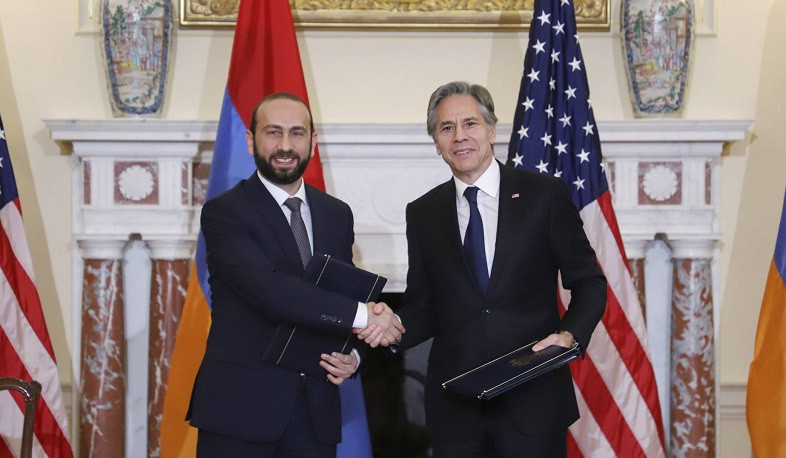 Meeting of Foreign Minister of Armenia and US Secretary of State

On May 2, Foreign Minister of Armenia Ararat Mirzoyan, who is in the United States on a working visit, held a meeting with US Secretary of State Anthony Blinken.

It was emphasized that over the years the sides have established a solid partnership based on the common values ​​of democracy, protection of human rights and the rule of law. Ararat Mirzoyan emphasized the support provided by the United States to Armenia for the strengthening of democracy, sustainable development and the fight against corruption. Anthony Blinken, in his turn, highly assessed the democratic reforms implemented in Armenia, and underscored the continuous support of the American side to them.

Both sides stressed the importance of resuming joint work within the framework of the Armenia-US Strategic Dialogue, the final session of which will be held on May 3 in Washington.

Prospects for the development of cooperation in areas of mutual interest were discussed. The Foreign Minister of Armenia stressed the need for deepening trade and economic ties with the United States, emphasizing that there are tangible opportunities for expanding Armenian-American cooperation in the fields of high and information technologies, energy, finance, banking, civil aviation, green economy and others.

Ararat Mirzoyan highly appreciated the US principled position of the US on the recognition of the Armenian Genocide, emphasized the importance of the statement of the US President Joe Biden on the anniversary of the Genocide this year, which reaffirms the commitment of US to humanitarian and human rights principles.

The sides also touched upon the issues of international and regional security and stability.

The Armenian side presented the situation in the South Caucasus region and Armenia's position on the processes aimed at establishing regional peace and stability. The interlocutors exchanged ideas on starting negotiations between Armenia and Azerbaijan on a comprehensive peace agreement. The Foreign Minister of Armenia stressed the importance of the US mediating efforts aimed at the peaceful settlement of the Nagorno-Karabakh conflict as a co-chairing country of the OSCE Minsk Group.

In the context of the humanitarian issues resulting from the 44-day war unleashed by Azerbaijan against Nagorno-Karabakh, the need for repatriation of the Armenian prisoners of war and other hostages, and preserving the Armenian cultural and religious heritage in the territories fallen under control of Azerbaijan.

During the meeting, reference was made to the implementation of the agreements on the establishment of the Commission on Border Demarcation and Security.

At the end of the meeting, Ararat Mirzoyan and Anthony Blinken signed a memorandum of mutual understanding on “Cooperation in the field of civil nuclear energy” between Armenia and the United States.