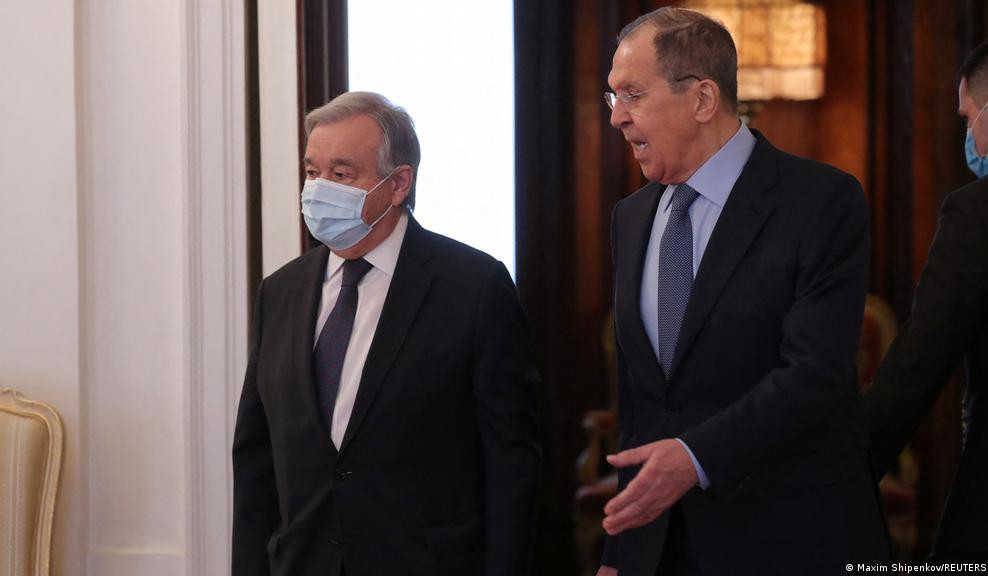 The United Nations is extremely interested in creating conditions for a ceasefire and a peaceful solution in Ukraine, UN Secretary General Antonio Guterres said at a meeting with Russian Foreign Minister Sergey Lavrov on Tuesday, TASS reports.

"I know that today we are facing a complex situation in Ukraine and there are different interpretations about what's happening. That does not limit the possibilities of a very serious dialogue on how best we can work to minimize the suffering," Guterres added.

Moscow is interested in cooperating with the United Nations in providing assistance to civilians in Ukraine, Lavrov said at a press conference following talks Guterres.

"We are interested in cooperating with our colleagues at the UN and the International Committee of the Red Cross in terms of additional efforts to alleviate the sufferings and plight of civilians [in Ukraine]," Lavrov pointed out.

According to him, after the UN chief had contacted the Russian Defense Ministry, a working group was formed under the ministry in Moscow to discuss specific issues with UN officials and help organize the safe delivery of humanitarian aid.

"Today, we discussed ways to boost our cooperation on this track. I think that following the Moscow talks, we will be able to outline such steps, which may be important in the current situation," the Russian top diplomat said.

Lavrov emphasized that the UN Office for the Coordination of Humanitarian Affairs had managed to send five humanitarian aid convoys to Ukraine along with the aid that was delivered there every day by the Russian Defense Ministry and Emergencies Ministry, as well as by various Russian public organizations.

Lavrov has said he told UN Secretary-General Antonio Guterres the situation around Ukraine is largely a result of NATO’s unbridled expansion.

"As we can see - and I explained this today to our colleague and friend Antonio Guterres - that to a large extent this situation kept growing and in the decisive context this happened as a result of the policy towards NATO’s unbridled expansion and assertion of a monopolar world, which our American colleagues and their allies preferred to conduct," Lavrov told a news conference following talks with the UN Secretary-General.

"As far as our geopolitical space is concerned, all that was done with the aim of Russia’s containment. It is precisely for this purpose that Ukraine has for many years been used as a springboard for annoying and containing our country," Lavrov said.

In particular, he recalled that the Ukrainian leadership was encouraged in its efforts to introduce legislation banning the Russian language, Russian mass media, Russian culture and everything Russian in general. Alongside this the steps to advance Nazi theories and practices were legalized," he said.

In the focus of the negotiations was the situation on the European continent, including events around Ukraine and the Lugansk and Donetsk republics.

"The current situation there took shape not today or yesterday. We are very grateful to the UN Secretary-General and his team for their readiness to consider the situation in Ukraine and around it not separately from other processes on the world scene, but in the context of these processes and trends that are accumulating and which in many cases are far away from the UN ideals and the principles enshrined in the UN Charter," he added.