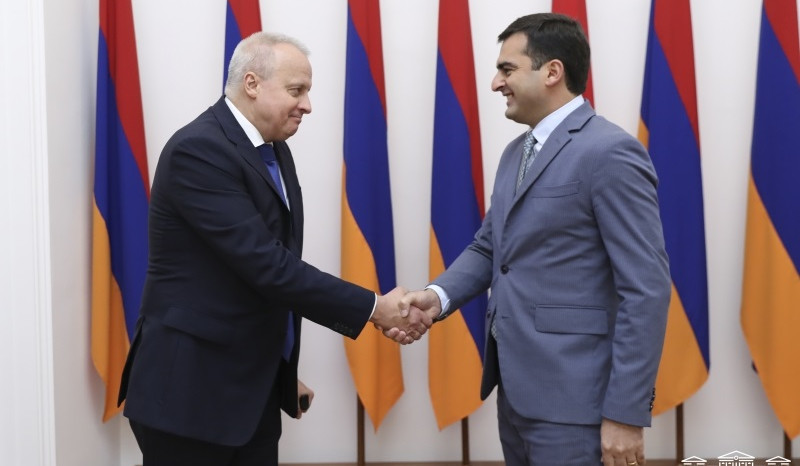 On September 30, Hakob Arshakyan, the Vice President of the National Assembly received Sergey Kopirkin, the Ambassador Extraordinary and Plenipotentiary of Russian Federation to Armenian Republic.

Hakob Arshakyan congratulated the Ambassador on the conducted parliamentary elections in Russia, valuing the good influence of the free and transparent elections on the development of the state.

During the meeting, there was a reference to the peaceful settlement of the Nagorno-Karabakh conflict.

Hakob Arshakyan, thanking the Russian side for the support, raised the case of the urgent settlement of humanitarian issues caused by the 44-day war, emphasizing that Azerbaijan must immediately return the prisoners of war and other detainees, according to the tripartite statement on November 9, 2020.

In his turn, the Ambassador mentioned that the issue is the center of attention of the authorities of the Russian Federation.

RA NA Vice President valued the role of the parliamentary diplomacy in the allied and strategic relationships of the two countries, he referred to the cooperative work of the delegacies and the cooperation in the inter-parliamentary platforms. In this context, Hakob Arshakyan mentioned that Armenian delegacies of the NA will soon be formulated in the Commonwealth of Independent States (CIS) inter-parliamentary assembly and in the Collective Security Treaty Organization and will participate in the sessions of the assemblies in the near future.

The sides also referred to the further activity of the inter-parliamentary commission of the RA National Assembly and the RF Federal Assembly, valued the cooperative work of the parliamentary commissions, talked about the expansion of the connections between the ruling parties.
In 2022, the 30th anniversary of the establishment of the diplomatic relationships expires between Armenia and Russia. The sides also discussed the issues of the agenda with the events to be held in that connection.