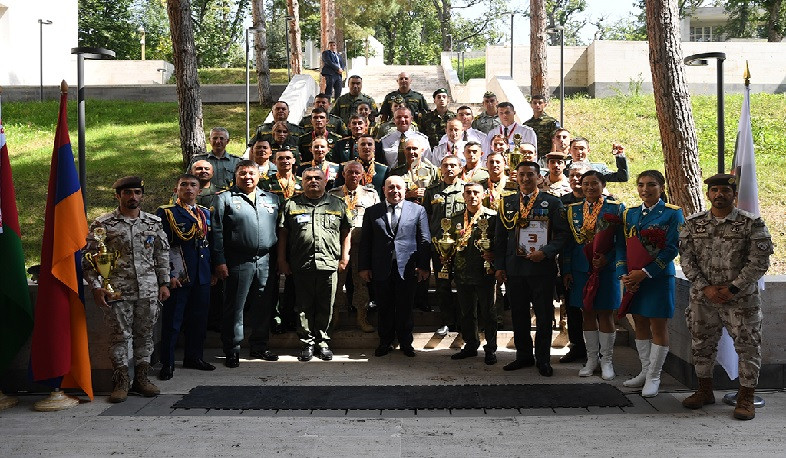 Armenia is the winner of the ‘Peace Fighter’ international competition

The closing ceremony of the ‘Peace Fighter’ International Competition took place on September 1 at the Monte Melkonyan Military School in Dilijan. Minister of Defense of the Republic of Armenia Arshak Karapetyan, high-ranking representatives of the Ministry of Defense and Armed Forces, heads of diplomatic missions accredited in the Republic of Armenia and military attachés attended the event.

Congratulating the teams of the participating countries on the successful holding of the tournament, Armenia’s Minister of Defense expressed confidence that the ‘Peace Fighter’ contest has become a real holiday of fighting brotherhood, contributing to the strengthening of international military cooperation for the sake of peace and security.

After comparing the results of all the competitions, by the decision of the jury, the best among the female servicemen in the international competition ‘Peace Fighter’ is the participant of Kazakhstan, senior sergeant Tolki Bakizhanova. Senior lieutenant Armine Grigoryan from Armenia’s Armed Forces team is in the second place. The third is Lieutenant Alexandra Akhtulova from the Russian team. The winner in the men's individual wrestling was senior lieutenant Hayk Hakobyan from the Armenian team. The second place also belongs to Armenia - senior lieutenant Harutyun Yakhanyan. In third place is the Russian participant Sergeant Andrei Vedensky.

All the winners were awarded with cups, medals and valuable gifts. The event ended with the performance of the song and dance ensemble of Armenia’s Armed Forces.

Representatives of the Armed Forces of Armenia, Russia, Belarus, Kazakhstan, Greece and the State of Qatar (as observers) took part in the ‘Peace Fighter-2021’ competition.

The ‘Peace Fighter’ International Military Skills Competition is held within the framework of the International Army Games tournament by the decision of the CIS Council of Defense Ministers in accordance with the plans of bilateral cooperation between Russia’s Ministry of Defense and the CIS Defense Ministries. For the fourth year in a row, the ‘Peace Fighter’ is being held in the Republic of Armenia.