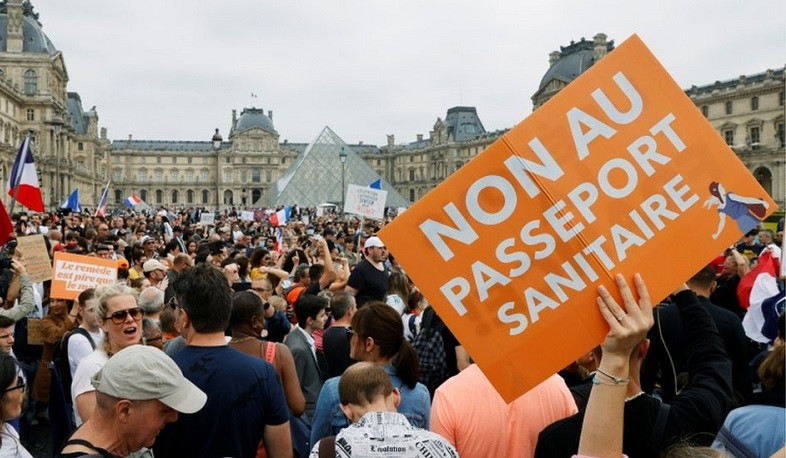 Protesters took to the streets across France on Saturday for a fourth consecutive weekend to demonstrate against a new health pass needed to enter a cafe or travel on an inter-city train, two days before the new rules come into force, France 24 reports.

The new rules championed by French President Emmanuel Macron make it obligatory to have either a full course of vaccination against Covid-19, be in possession of a negative test or be recently recovered from the virus to enjoy usually routine activities.

Macron, who faces re-election next year, hopes the new rules will encourage all French to be vaccinated against Covid-19 and defeat the virus and its fast-spreading Delta variant.

But opponents argue that the rules encroach on civil liberties in a country where individual freedom is prized.

Two days before the new pass comes into effect, protests have been planned in a number of cities, including Paris, Lille in the northeast and Toulon on the Mediterranean coast.

In one of several protests planned in the Paris area alone, hundreds began gathering at Pont de Neuilly metro station for a march to the city center, chanting "Freedom!" and "No to the health pass".

Wearing a mask, Alexandre Fourez, 34, said he was protesting for the first time and that he had himself recovered from Covid-19. "The problem with the health pass is that our hand is being forced," said the marketing employee, adding he "really has difficulty believing its use will be temporary".