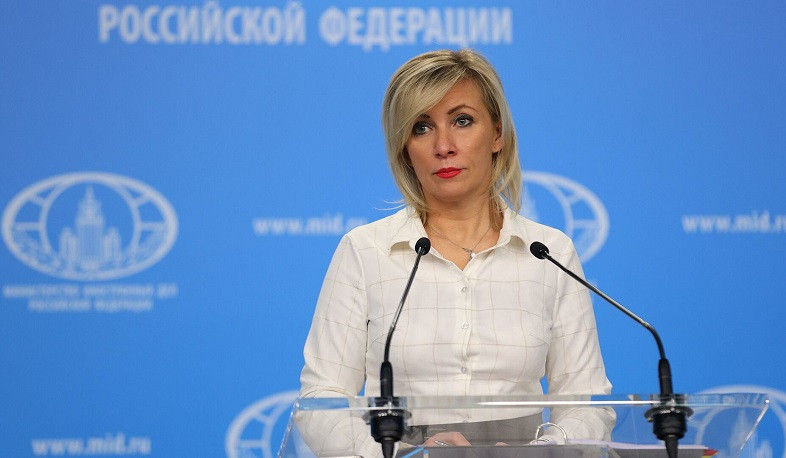 We are very concerned about any escalation of tension in certain parts of Armenia and Azerbaijan: Maria Zakharova

During the weekly briefing, the official representative of the Russian Foreign Ministry Maria Zakharova referred to the situation on the Armenian-Azerbaijani border, answering the questions of the correspondent of the Public Television Mary Yegoryan.

“Since July 14, on the Armenian-Azerbaijani border in the Yeraskh section, the Azerbaijani armed forces have been carrying out various provocactions almost every day, opening fire on Armenian positions and border settlements. As a result, a contract soldier of Armenia’s Armed Forces was killed and the Head of Yeraskh community was injured. Since the end of the Second Artsakh war grenade launchers have been used for the first time.”

The second question referred to the territorial ambitions of the President of Azerbaijan towards Syunik, Sevan and Yerevan. ‘Lurer’ was interested in the reaction of the Russian Foreign Ministry on this issue.

The third question referred to the statement of the Acting Prime Minister of the Republic of Armenia that Baku is obstructing the unblocking of transport routes in the region defined by the trilateral statement.

The official representative of the Russian Foreign Ministry Maria Zakharova gave a general comment on all the questions.

“Russia, which has close relations both with Armenia and Azerbaijan, pays special attention to the Armenian-Azerbaijani border, and of course, to the situation in Nagorno-Karabakh, where our peacekeeping troops are deployed. The Russian side continues to make significant contributions to the establishment of stability and peace in Nagorno-Karabakh, as well as humanitarian issues, including the return of prisoners of war, refugees, and the exchange of the remains of the dead. We contribute to the establishment of mutual trust between Yerevan and Baku, we continue to ensure the access of the UN High Commissioner for Refugees, UNESCO missions to the region.

Of course, we are concerned about any escalation of tensions in certain parts of Armenia and Azerbaijan. They have a very negative impact on the regional situation; they do not contribute to the establishment of a dialogue between Armenia and Azerbaijan. Such incidents lead to unjustified losses among the residents. On the occasion of the death of the Armenian soldier, we express our condolences to his relatives and wish all the injured a speedy recovery. Our position is well known. Border incidents must be resolved exclusively through political and diplomatic means. It is very important to refrain from belligerent rhetoric and methods of force.

Coordinated work is required to find mutually acceptable concessions. We are convinced that a stable de-escalation can be ensured only by the early start of the border delimitation between Armenia and Azerbaijan, and then the demarcation work. We are ready to strengthen these efforts with our cartographic information. The Russian side has prepared a number of documents that can move the discussion to a constructive field. At present, contacts on this topic continue with the foreign and defense ministries of the three countries, as well as with the border services.

The topic of regional stability was in the focus of the meeting between the President of the Russian Federation and the Acting Prime Minister of the Republic of Armenia, as well as the agenda of the meeting of the Presidents of Russia and Azerbaijan. The leaders of Russia, Azerbaijan and Armenia reaffirmed their determination to continue the partnership, which aims to find optimal solutions. We note with satisfaction that the working groups headed by the Deputy Prime Ministers of the three countries had a number of significant discussions,” said Maria Zakharova.