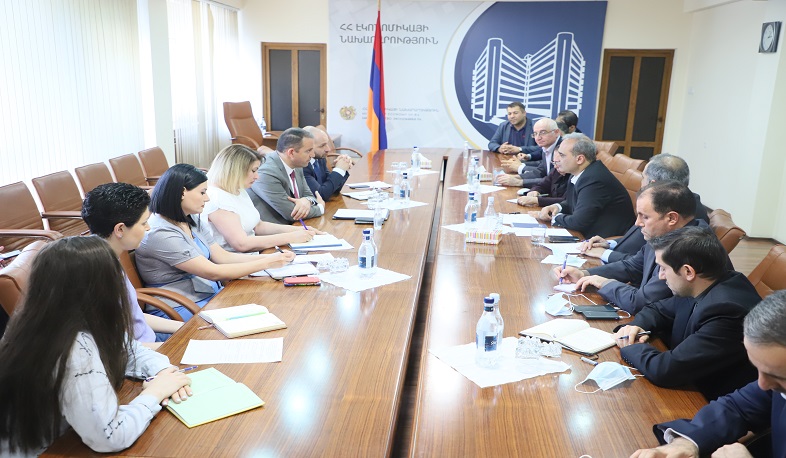 On June 29, Acting Minister of Economy of Armenia Vahan Kerobyan received the delegation of Mehdi Elyasi, Deputy for Policy Making and Strategic Evaluation at the Vice Presidency for Science and Technology of the Islamic Republic of Iran.

The Iranian delegation, consisting of the deputy minister of IT and communication, members of parliament, representatives of a number of major companies, has arrived in Armenia to take part in the Armenian-Iranian business forum. The Deputy Ambassador of the Islamic Republic of Iran to Armenia Ali Mohammad Mottaghi also attended the meeting.

“The Armenian-Iranian agenda is one of our priorities. In order to make the bilateral cooperation more effective, it’s important to fulfill and complete our joint projects”, Mr. Kerobyan said in his welcoming remarks.

The Iranian delegation members stated that during the forum the Iranian companies have showed great interest to conducting effective cooperation with the Armenian side in areas such as industry, construction, agriculture, food, textile, pharmaceutics, etc. Afterwards, the head of the delegation Mehdi Elyasi, summing up the issues discussed during the conference, presented a number of proposals from the Iranian side.

Informing that the Iranian side has a rich experience in establishing high-tech centers in different countries, he suggested establishing a similar center in Armenia, where bilateral B2B meetings will be organized, discussions related to the sphere will be held.

The meeting also touched upon the bilateral cooperation within the ‘Meghri’ and ‘Aras’ free economic zones. Taking into account Armenia’s membership in the Eurasian Economic Union, the parties discussed the possibilities of organizing joint productions in different sectors of the economy, exporting the finished products to EEU and other countries.

The Iranian side expressed readiness to cooperate in upgrading the Armenian medical facilities with Iranian equipment. Cooperation prospects in pharmaceutics were also discussed.

The delegation members proposed to study the possibilities of creating a “smart” city with joint efforts. A business forum is expected to be held in Iran in autumn during which a broad range of issues relating to the Armenian-Iranian economic cooperation will be discussed.