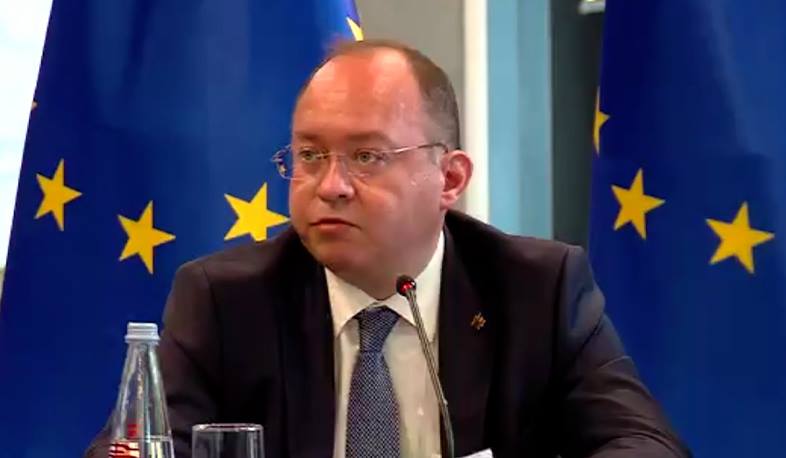 Return of captives is a priority: Romanian Foreign Minister

The South Caucasus has a strategic importance for the EU, Foreign Minister of Romania Bogdan Aurescu announced in a press conference in the EU office in Georgia.

Summarizing the visit of Austrian, Romanian and Lithuanian FMs to the three South Caucasian countries, he emphasized that it was the first visit of the European Foreign Ministers authorized by the High Representative of the Union for Foreign Affairs and Security Policy, Vice-President of the European Commission, Josep Borrell.

“I think this was a successful experiment,” Aurescu said. He said that during the visits they conveyed the messages of solidarity of the EU member states.

“We conveyed the commitments of the EU, prioritizing the security, stability and welfare of all the 3 South Caucasian countries, as well as the EU determination to get involved in the settlement process of the prolonged conflicts in this region more actively, since it has a strategic importance for the EU,” the Romanian FM said.

Referring to the prolonged conflicts in the region, Bogdan Aurescu noted that they had a negative impact on the development of the Eastern Partnership countries. They have hindered the development of these countries for decades, negatively affected regional security and stability, and created socio-economic difficulties for the people living there.

“In this context, it is especially important to mobilize the EU’s attention to this issue, to identify the best ways to use the EU toolkit, the scope of cooperation to support the affected countries,” Aurescu said.

He urged their partners in the South Caucasus to derive all possible from the tools provided by the EU Eastern Partnership to strengthen regional cooperation for the benefit of peace and prosperity.

“All three countries supported the creation of regional format comprised of the tree countries,” the Minister said.

Referring to the visit to Armenia, Bogdan Aurescu noted that during the visit they congratulated the Acting Prime Minister of Armenia Nikol Pashinyan on the occasion of winning in the snap parliamentary elections, highly assessing the democratic nature of the elections, as recorded by the OSCE/ODIHR and other observer missions.

He underscored that they had in-depth discussions in Armenia and Azerbaijan over the current situation and upcoming activities, considering the military operations of the previous year.

“'We urged to act in constructive nature, since the confidence-building measures, including the release of all the POWs and providing all the minefield maps, remain a priority,” the Foreign Minister of Romania said, adding that the EU is ready to assist in any issue that can lead to a negotiated, stable and lasting solution of issues. ''I emphasized the importance of reconciliation between the two societies. This process may be difficult and time-consuming, but has no alternative,” the Minister said.

He stressed that his country supports and highlights security and stability in the Eastern Partnership countries.