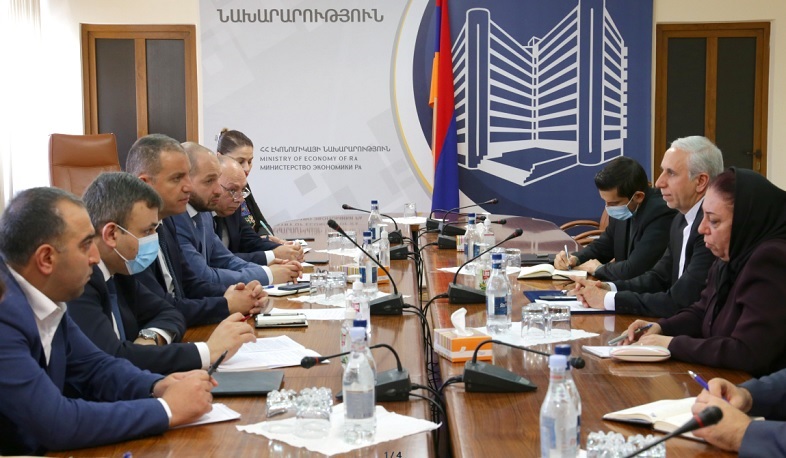 Welcoming the guest, Vahan Kerobyan said the close cooperation with Iran has further intensified recently, adding that a number of agreements have been reached with the Iranian delegations during their visit in Armenia, aimed at expanding the partnership in different branches of the economy.

Kerobyan highlighted putting the joint projects and initiatives on a practical base as soon as possible. In response, the Iranian Ambassador informed that the Iranian side has already developed a roadmap and a timetable for the implementation of the joint programs outlining the program priorities. The availability of the roadmap and schedule will allow implementing the programs included in the agenda of the Armenian-Iranian cooperation in a short period.

The meeting participants discussed also the issues on the agenda relating to trade, industry, pharmaceutics, tourism and other sectors, as well as the implementation of prospective programs, attraction of investments, effective organization of exports and imports between Armenia and Iran. Highlighting the cooperation in pharmaceutics sector, Vahan Kerobyan informed that several Armenian pharmaceutical companies will soon visit Iran to discuss the cooperation opportunities and reach agreements.

The sides paid attention also to the development of inter-provincial cooperation. They noted that in case of effectively organizing the bilateral cooperation, the trade turnover volumes and tourism flows will increase considerably. In this respect the caretaker minister touched upon the necessity of operating Yerevan-Isfahan direct flights, adding that its launch will contribute to the development of relations between the two nations. The ambassador proposed to form a joint working group with the relevant structure of Iran and Tourism Committee, which will work out joint tourism packages to attract tourists from Europe.

The Ambassador also informed that Iranian construction companies are interested in participating in the construction of Sisian-Kajaran section of the North-South highway. During the meeting, Vahan Kerobyan stressed the importance of the Persian Gulf- Black Sea international transport corridor project and expressed readiness to contribute to the implementation of the project within his powers.

Touching upon the memorandum of understanding signed between Armenia’s Ministry of Economy and the Ministry of Roads and Urban Development of the Republic of Iran on May 24, Vahan Kerobyan informed that the ministry has already formed a working group on the implementation of the memorandum, headed by Deputy Minister Varos Simonyan.

The Armenian and Iranian sides agreed to take concrete actions to develop joint projects contributing to economic development and implement the already existing ones as soon as possible.