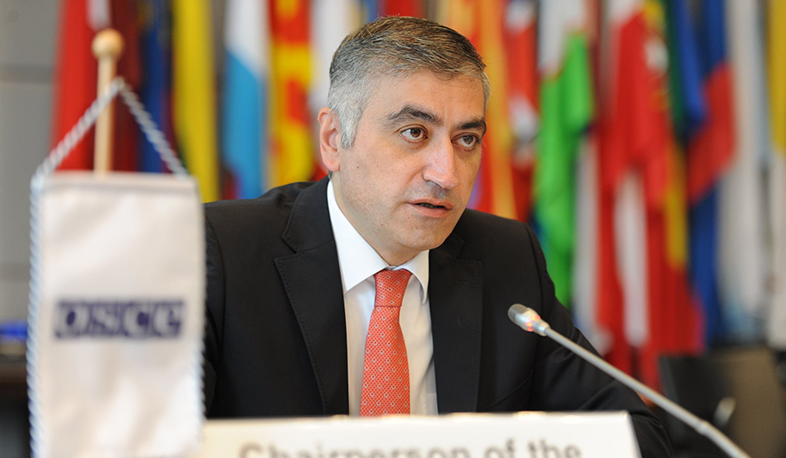 The session of the RA Presidency of the OSCE Security Cooperation Forum dedicated to UN Security Council Resolution 1540 took place.

Opening the meeting, Ambassador Armen Papikyan, Chairman of the OSCE Security Cooperation Forum (SCF), Head of the Armenian Mission to the OSCE, noted that the gradual weakening of multilateral diplomacy and arms control regimes, gaps in arms control mechanisms, and technological progress may create conditions for terrorists to use weapons of mass destruction.

It was stressed that the control and non-proliferation of nuclear, chemical and biological weapons requires close cooperation between regional and international organizations and systemization of operations, including ensuring effective and efficient international control mechanisms and assisting states to develop national capabilities.

The meeting was attended by Georgy Kocharyan, Head of the International Security Department of the RA Ministry of Foreign Affairs, Edward Rice-Howell, Deputy Chairman of the 1540 Committee of the UN Security Council, Grigory Mashkov, Ambassador with Special Assignments of the Russian Foreign Ministry, Todd Perry, National Coordinator of UNSCR 1540.

The OSCE participating States were introduced to Armenia’s efforts to prevent the proliferation of weapons of mass destruction. The participants’ attention was drawn to the presence of foreign terrorist fighters affiliated with ISIS, Jabhat al-Nusra and other terrorist organizations in the South Caucasus, which is a real threat to the OSCE regional security.

In order to prevent further acts of terrorism, as well as to exclude the possible use of weapons of mass destruction by those terrorists, it is necessary to establish an effective investigation mechanism.

The meeting touched upon the strengthening of cooperation between the UN Security Council Committee 1540 and the OSCE, in particular, implementation of UN Security Council Resolution 1540 in 2021 ahead of a comprehensive review process. Ahead of a comprehensive review process. The contribution of the OSCE as a regional organization in the international efforts to strengthen the global non-proliferation regime was also discussed.