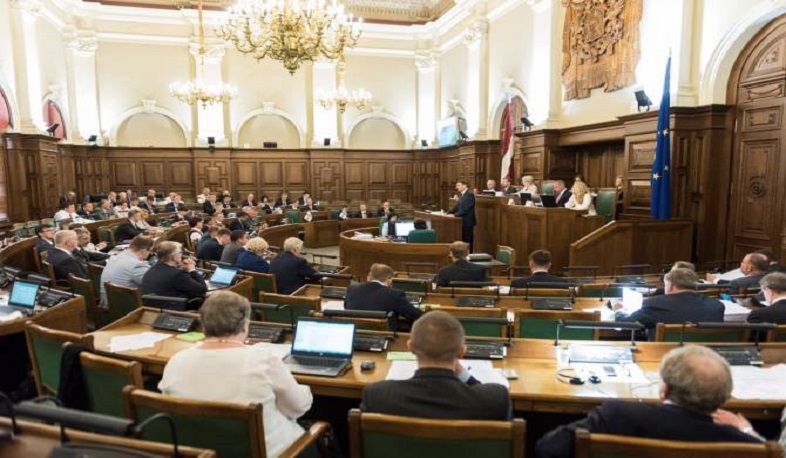 The Saeima of Latvia on Thursday passed a declaration on the Armenian Genocide committed in the Ottoman Empire during World War I. The document, drafted by the Saeima Foreign Affairs Committee, received  58 in favor votes of the Saeima members out of 100, Ambassador of Armenia to Lithuania, Latvia and Estonia Tigran Mkrtchyan, who is finishing his mission in those countries, informed on Facebook.

Back on April 24, 2020, two forces in the Latvian parliament, members of the ruling coalition, the New Conservatives and the Yes to Development Parties, made statements condemning the Armenian Genocide. On the initiative of these forces, as well as most of the representatives of the Agreement party, the process of recognizing the Armenian Genocide began in February 2021, as a result of which a resolution-statement was submitted on April 23.

As the Latvian Information Agency reports, in the declaration, the Saeima denounces the crimes committed by the Ottoman Empire against Armenians - killings and forced deportations. According to the document, it is important to remember the lives of people who perished in the Armenian Genocide organized by Ottoman authorities - mass killings and deportations, which started on April 24, 1915 with arrests of ethnic Armenian intellectuals and activists in Constantinople.

The Latvian parliament next refers to the UN Convention on the Prevention and Punishment of the Crime of Genocide (Genocide Convention) and the European Parliament’s resolution recognizing these World War I events as genocide as defined in the UN Genocide Convention.

The lawmakers underline that Latvia condemns all crimes against humanity and realizes its duty to recognize and remember these crimes to prevent their repetition in the future.

The parliament says in the document that as a result of the Ottoman authorities’ actions, many ethnic Armenians were forcibly deported to other regions of the empire, which resulted in the loss of many lives due to famine, physical violence and killings.

The Saeima underlines that Latvia honors the memory of all Armenian Genocide victims and shows respect for the survivors, as well as points out that open and free discussions on historical events are indispensable for the development of a healthy and mature democracy.

The Latvian parliament calls on the international community to assess these historical events and set sights to the future, which should be built free from violence and intolerance - a future where human rights are honored and each individual can feel free, unthreatened and secure.