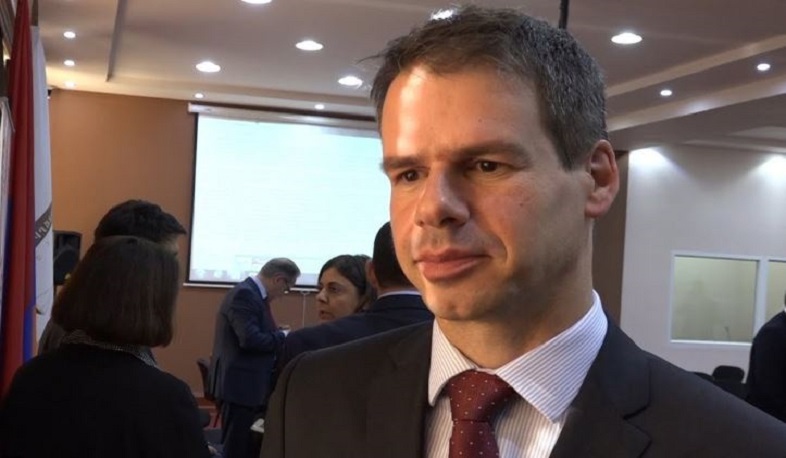 Resumption of negotiations on Nagorno-Karabakh conflict is priority task of OSCE MG co-chairs: Ambassador of France to Armenia

The Presidents of France and Russia have agreed to resume the efforts within the OSCE Minsk Group for achieving the stable settlement of the situation around the Nagorno-Karabakh conflict. Concrete initiatives will launch on this direction in the nearest future, French Ambassador to Armenia Jonathan Lacôte said in response to the inquiry of Armenpress, commenting on the telephone conversation held between Russian President Vladimir Putin and his French counterpart Emmanuel Macron.

“The President of the Republic held a phone talk on Monday, April 26, with Russian President Vladimir Putin. For the current situation in the Caucasus, President Macron highlighted the necessity of recording concrete progress on matters relating to captives, humanitarian situation and heritage preservation. The two Presidents agreed to resume the efforts within the Minsk Group for achieving the stable settlement of the situation. Concrete initiatives will launch on this direction in the nearest future,” the Lacôte said.

The Ambassador stated that the resumption of negotiations for the peaceful settlement of the Nagorno-Karabakh conflict is the priority task of the Co-Chairs, as it was stated in their April 13 statement.

Asked what steps the OSCE Minsk Group Co-Chairs take so that Azerbaijan will return the Armenian prisoners of war, the French Ambassador stated that the Co-Chairs in their recent statement called for the return of all POWs.

“In their April 13 statement the Co-Chairs called for the release of all prisoners of war and detained persons in accordance with the international humanitarian law. On April 24, Minister of State Jean-Baptiste Lemoyne received the families of captives in the French Embassy,” the Ambassador said.

Lacôte also commented on the opening of the, so-called, ‘Trophy Park’ in Baku, which reportedly displays Armenian military equipment taken as a trophy during the war and shows dehumanizing scenes, including wax mannequins depicting dead and dying Armenians soldiers, recalling his statement according to which war is not a subject for staging, and now the priority must be to finding a solution to the conflict.