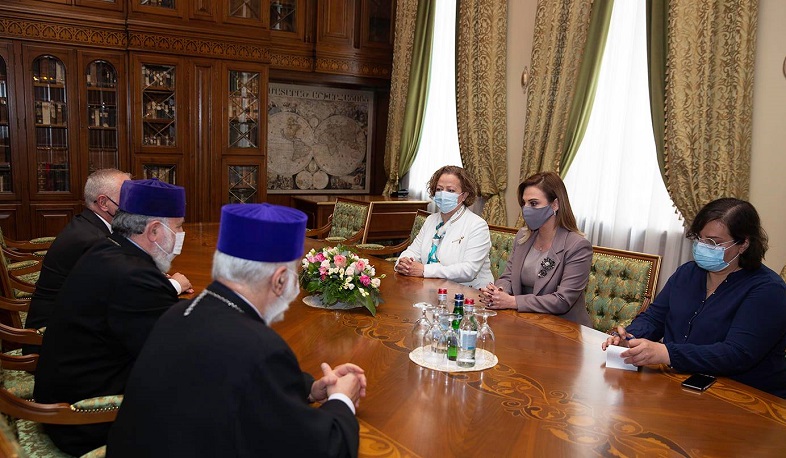 On April 22, at the Mother See of Holy Etchmiadzin, His Holiness Karekin II, the Supreme Patriarch and Catholicos of All Armenians received Minister of Youth and Sport of Lebanon Vartine Ohanian, who was accompanied by Ambassador Extraordinary and Plenipotentiary of Lebanon to Armenia Maya Dager and Ambassador Extraordinary and Plenipotentiary of Armenia to Lebanon Vahagn Atabekyan.

During the meeting, Minister Ohanian transmitted the greetings and kind wishes of President of Lebanon Michel Aoun and informed that she arrived in Armenia as a special representative of the President of Lebanon to attend the ceremonies in commemoration of the Armenian Genocide on April 24.

She also emphasized that the solutions to the challenges and problems facing the historic Homeland are primary issues for the Armenians of Lebanon, who are doing their best to help solve them.

The Catholicos of All Armenians welcomed Minister Ohanian’s visit to the Mother See of Holy Etchmiadzin, expressed confidence that the Armenians and Lebanese will overcome the hardships and transmitted his greeting and kind wishes to the President and government of Lebanon, adding that the Lebanese authorities have always supported Armenia.

His Holiness also expressed gratitude to the friendly people of Lebanon for providing shelter to the Armenians who survived the genocide and expressed confidence that the friendship of the two peoples must grow stronger.

The parties also touched upon life in the Armenian community of Lebanon and the hardships the Lebanese-Armenians have faced and attached importance to the mission of the Catholicosate of the Great House of Cilicia to maintain and empower the community.