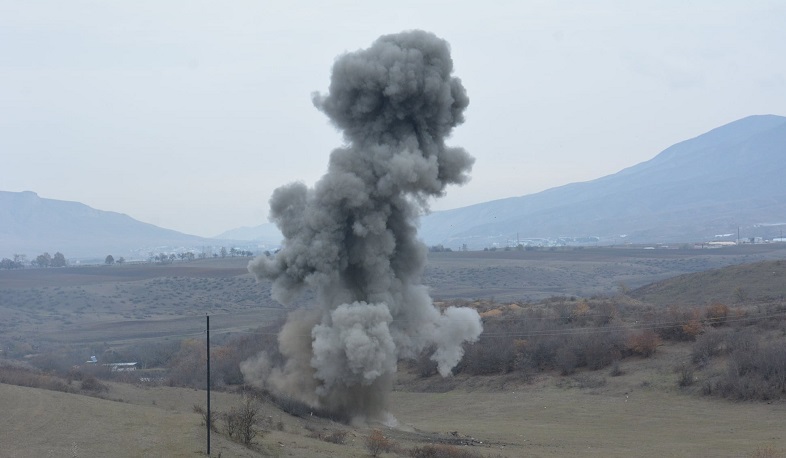 Twenty-four grenade launchers and 92 cannon shells were neutralized: the State Emergency Service of Artsakh sums up the week

The State Emergency Service of the Ministry of Internal Affairs of the Republic of Artsakh summed up the week.
“From April 5 to 11, 2021, the Crisis Management Center of the State Emergency Service received 1054 calls. The number of calls increased by 63 as compared to the previous week.
The number of fires has increased. Last week, eight fire cases calls were registered, most of which broke out in dry grasslands and garbage dumps. In all cases, the firefighters of the service carried out firefighting work, the fire did not spread to residential areas. There are no casualties.
One report of a traffic accident received at the 911 call center. The incident took place in Askeran region, on the Askeran-Stepanakert highway. Three citizens were injured. The rescuers of the special emergency response unit carried out urgent rescue operations, provided first aid and transported the injured to a medical center.
The sapper detachments continue to cooperate with the sappers of the Russian Ministry of Emergency Situations, the Halo Trust non-governmental organization operating in Artsakh, and the Humanitarian Demining Center Foundation. The process of finding and neutralizing weapons and ammunition continues on a daily basis. Forty-seven calls were received during this week.
During the week, two anti-tank mines, eight explosives, eight rocket-propelled grenades, five ball bombs, 24 mine throwers and 92 artillery shells were neutralized.
An emergency accident was registered in Martakert. An explosion took place in one of the guesthouses, under unknown circumstances, after which a fire broke out. Two citizens were injured. Rescuers provided first aid and took them to hospital.
Thirty-eight calls about domestic issues were received. The State Emergency Service continues the humanitarian process of helping the population. Drinking water is supplied to the residents of Dashushen, Khnapat and Sarnaghbyur communities of Askeran region on a weekly basis.
With the sharp rise in temperature, the movement of snakes became noticeable. Two snake-finding cases were reported during the week.
The search and rescue unit made seven exits during the week. A total of 1,539 bodies have been found and evacuated from the territories under the control of Azerbaijan,” the statement reads.
Views 53