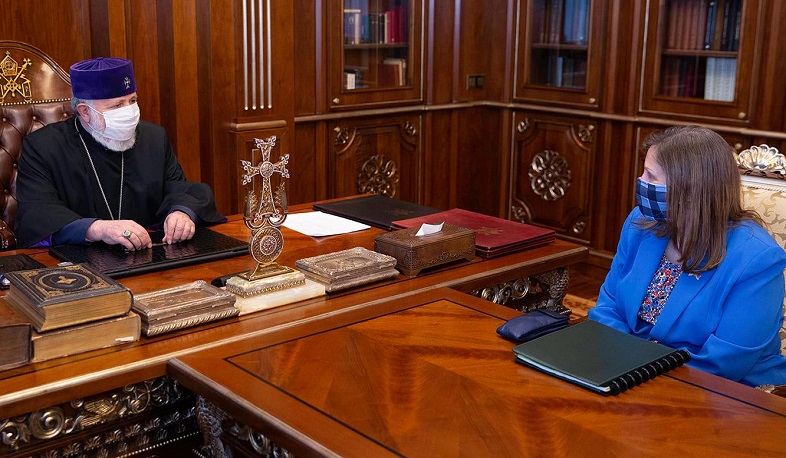 On March 30, His Holiness Karekin II, Supreme Patriarch and Catholicos of All Armenians, received in the Mother See of Holy Etchmiadzin Lynne M. Tracy Ambassador Extraordinary and Plenipotentiary of the United States of America to the Republic of Armenia.
In the person of the Ambassador, His Holiness conveyed his appreciation to the US authorities for their humanitarian assistance to Armenia and the people of Artsakh (Nagorno-Karabakh) through the embassy during the pandemic, especially during the difficult war and post-war period.
Referring to the battles unleashed by Azerbaijan against the Republic of Artsakh and the post-war consequences, His Holiness expressed confidence that the OSCE Minsk Group Co-Chairs will continue their efforts to establish stability in the region and a peaceful and just settlement of the Nagorno-Karabakh conflict.
During the meeting, the sides referred to the impact of the programs implemented by the Armenian Church in the conditions of the epidemic.
They spoke about the support provided by the dioceses of the Armenian Apostolic Church during the war, as well as the spiritual care of the servicemen and the families displaced from Artsakh.
His Holiness provided information on the ongoing social assistance programs, pastoral work with the families of the dead and missing soldiers.
The Catholicos of All Armenians and the US Ambassador to Armenia particularly touched upon the issue of the measures taken by the Armenian Church to release the captives and find the missing.
The issues of preservation of the spiritual-cultural heritage of Artsakh in the occupied territories, the documented incidents of desecration and destruction of the sanctuaries were discussed in detail.
Views 59