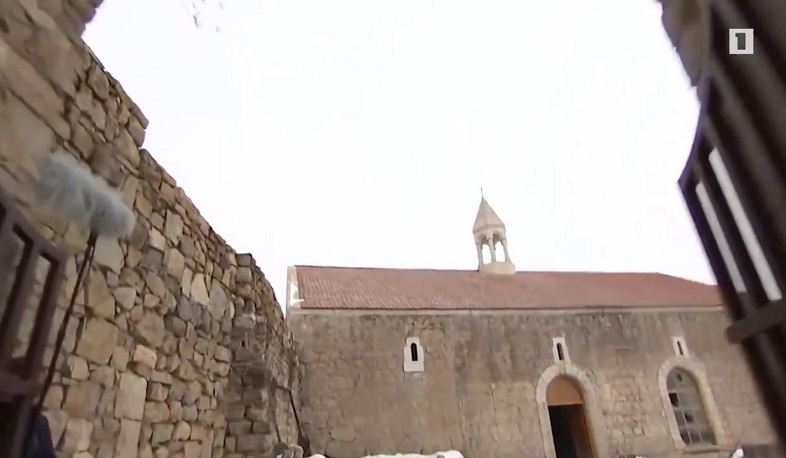 The history forgers: Azerbaijan continues its policy of eliminating the Armenian trace in Artsakh

The handwriting not changed even in the 21st century – Azerbaijan tries to eliminate the Armenian trace in Artsakh at the highest level. The leader of this country personally takes the recurrent campaign. Ilham Aliyev visited the occupied Hadrut region and called the 17th-century Armenian Church of St. Astvatsatsin (Virgin Mary) in the village of Tsakuri Albanian.
“This is our ancient temple, the temple of our Udi brothers; they will come here, too. They (Armenians-ed.) falsified everything,” Ilham Aliyev, President of Azerbaijan said.
The video of Aliyev’s visit shows that the cross is removed from the church, and the Armenian inscriptions are annihilated and replaced. Meanwhile, St. Astvatsatsin or Tsaghkavan church was part of a monastic complex. It was founded in the 17th century and is considered one of the masterpieces of medieval architecture and culture in Artsakh.
Aliyev’s behavior was followed by the strict response from the RA Ministry of Foreign Affairs – Azerbaijan seeks to eliminate or assimilate the cultural heritage of Artsakh.
“In parallel with the physical destruction of the cultural monuments of Artsakh,  which are currently under its control, Azerbaijan at the highest level has resorted to a deplorable practice of falsifying historical facts and alienating religious and cultural values of the Armenian people. It is with this purpose that the President of Azerbaijan misrepresents the nature of the Armenian church of the 17th century in the village of Tsakuri of Hadrut region distortedly claiming it to be so-called ‘Albanian’ and labeling the Armenian inscriptions on its walls as ‘fake’, thus preparing grounds for yet another act of vandalism,” the RA Ministry of Foreign Affairs statement reads.
The Armenians living in Artsakh cannot survive under the Azeri control, and the so-called ‘peace’ to be formed on the basis of the destruction of the peaceful settlements of Artsakh, historical and cultural heritage, the extermination of the Armenian population and the creation of Azerbaijani settlements instead, cannot be stable, the RA Foreign Ministry is convinced.
The Ombudsman of Armenia notices elements of fascism in Baku's behavior.
“This is nothing else but hatred on the ethnic-religious basis at the highest level of government, evidence of ethnic cleansing and genocide policies in Artsakh, a fascist attitude,” Ombudsman Arman Tatoyan’s statement reads.
Architect Ashot Hakobyan shows the Armenian inscriptions of Tsakur Church, the date of its foundation, the snake-like sculpture typical of Armenian churches.
A cross stone (khachkar) belonging to 1198 has been preserved in the churchyard, which proves that Armenian spiritual structures have been here long before. The expert finds Aliyev's statements ridiculous, as the architecture of the church is typical Armenian.
The expert is convinced that Azerbaijan will continue its policy in the future, however, will not follow the path of open destruction of the monuments, as the international community pays too much attention to Artsakh. Nevertheless, the reality is that a few days ago photos appeared on the Internet showing how Azerbaijan destroyed the dome of the ‘Green Chapel’ (Kanach Zham) church in Shushi. Noteworthy that the church was destroyed months after the military actions finished in November 2020.
Author:Artur Khachatryan
Views 164