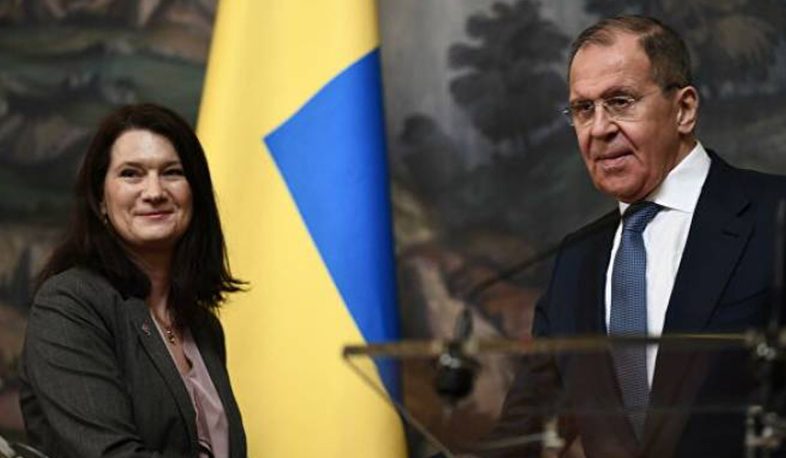 On the upcoming working visit to Russia of the Minister of Foreign Affairs of Sweden, the OSCE Chairman-in-Office A. Linde.

“On February 2, in Moscow, Russian Foreign Minister Sergey Lavrov will hold talks with Swedish Foreign Minister Ann Linde, who will arrive in Russia on a working visit as the OSCE Chairman-in- Office .

Sergey Lavrov and A. Linde will discuss a wide range of issues on the OSCE agenda, as well as the security situation in the Baltic Sea region and northern Europe, cooperation in the Arctic, and topical issues in Russian-Swedish bilateral relations.

The OSCE Chairmanship-in-Office, elected by the OSCE participating States for one calendar year, is responsible for coordinating and consulting on current affairs, appointing heads of field missions and special envoys for conflicts and issues of concern, holding meetings of decision-making bodies and other events. A country assuming responsibility to lead the OSCE must be guided by consensus approaches, take into account the full range of views of the participating States and strictly follow the chairmanship's mandate enshrined in the decisions of the Ministerial Council in Porto 2002 on the role of the Chairmanship-in-Office and the Permanent Council No. 485 of 2002 on public speaking on behalf of the Organization.

During the talks, it is planned to discuss the current tasks of the OSCE in three dimensions - military-political, economic-environmental and humanitarian - and the work plans of the Organization in 2021.

In particular, an exchange of views will take place on the state of the European security architecture and the erosion of international legal instruments for building confidence, the interaction of the participating States within the framework of the OSCE Forum for Security Co-operation, on the “structured dialogue” on security challenges and threats going on since 2017, its contributing to the restoration of confidence and de-escalation of tensions in the Euro-Atlantic area.

A prominent place on the agenda of the talks will be occupied by the topic of raising the profile of the OSCE in the fight against common transnational threats for the participating States - international terrorism, drug trafficking, challenges in the use of ICT, cross-border organized crime, human trafficking. The parties will discuss the preparation of specialized OSCE events, interaction on this issue with the CSTO , CIS and SCO .

The ministers will pay attention to the issues of the economic and environmental dimension of the OSCE, among which are the development of trade and transport interconnection in the interests of integrating integration processes in the OSCE area with the prospect of forming a Greater Eurasian Partnership, the OSCE's possible contribution to overcoming the socio-economic consequences of the coronavirus, cooperation on the as the main topic of the 29th OSCE Economic and Environmental Forum on ensuring the full participation of women in economic activity. A “synchronization of clocks” will take place according to the plans of OSCE humanitarian activities. It is important that they reflect the priority tasks of protecting traditional values, children's rights, social and economic rights, national minorities, especially their linguistic and educational rights,

It is expected to consider issues related to the OSCE's assistance in the settlement of conflicts in eastern Ukraine, in Nagorno-Karabakh and Transnistria, as well as the Organization's mediation in the Geneva discussions on security and stability in the Caucasus, its activities in the Balkans and Central Asia.

Applied to the situation in Ukrainethe emphasis will be placed on the work of the Contact Group, coordinated by the OSCE, the need for a meaningful direct dialogue between Kiev, Donetsk and Lugansk as parties to the conflict in order to fully and consistently implement the Minsk Package of Measures. An exchange of views will take place on the activities of the OSCE Special Monitoring Mission (SMM), which is designed to monitor the situation in Donbass and support the observance of human rights and national minorities throughout the country. The work of the Mission is especially important against the backdrop of the continuing rampant of aggressive nationalism, violent Ukrainization and violations of the linguistic and educational rights of citizens, especially Russian speakers. We look forward to thematic reports from the SMM on the destruction of civilian infrastructure over the entire period of the conflict, as well as manifestations of aggressive nationalism, neo-Nazism and xenophobia.

The activities of the OSCE specialized institutions (Office for Democratic Institutions and Human Rights, High Commissioner on National Minorities, Representative on Freedom of the Media) will be examined through the prism of their observance of existing mandates and elimination of complaints from the participating States, unwillingness to respond to facts discrimination in these areas, in particular in the Baltic countries.

With regard to the OSCE field presences, it is planned to discuss the possibilities of optimizing the programs and projects implemented within their framework in accordance with the needs of the host states.

The Russian side will raise the question of the need to increase our personnel representation in the OSCE structures.

When discussing the development of Russian-Swedish bilateral relations, it is intended to pay special attention to the promotion of mutually beneficial cooperation in such areas as the trade, economic, environmental, cultural, humanitarian and law enforcement spheres, in development of the agreements reached following the talks between President of Russia V.V. Putin with Swedish Prime Minister Sergei Leuven in St. Petersburg on April 9, 2019

An impetus was given to work within the framework of the intergovernmental Russian-Swedish Observing Committee on Trade and Economic Cooperation - on June 8, 2020, its co-chairs, Minister of Industry and Trade of the Russian Federation D.V. Manturov and Minister of Foreign Trade of Sweden A. Halberg held a videoconference, agreed to lead the line on organization in 2021 in Stockholm, if the epidemiological situation allows, the next session of this important body for coordinating bilateral practical interaction. One of the key issues is overcoming the negative trend of reducing the volume of mutual trade caused, among other things, by the COVID-19 pandemic.

Currently, there are about 500 Swedish companies operating in Russia. The main Swedish investor is the IKEA concern.

The largest Russian investment in the Swedish economy is the Kubal aluminum plant in Sundsvall owned by OK Rusal . The dialogue with the Swedish authorities is ongoing to improve the economic conditions for the operation of this enterprise, which is experiencing, in particular, difficulties due to the high energy consumption of aluminum production.

Among the problematic issues of practical cooperation is the refusal of the Swedish authorities to the Swedish company Quintus Technologies AB in the license to export to Russia spare parts for the industrial press of the automobile manufacturer GAZ Group under the pretext that this equipment is allegedly a dual-use product and is subject to anti-Russian EU sanctions . At the same time, the press has been in operation in Russia since 2009, and earlier the Swedish regulator had no questions.

Russian-Swedish practical cooperation in the field of healthcare is developing, including in the context of countering the COVID-19 pandemic. In December 2020, a memorandum of cooperation was signed between N.F. Gamaleya Research Center for Electrochemistry , RDIF and the Swedish-British company AstraZeneca to create a combined vaccine against coronavirus infection.

In 2022, under the auspices of the Ministry of Culture of the Russian Federation, it is planned to hold in Sweden, along with Denmark and Norway , a cultural festival "Russian Seasons".

The dialogue with the Swedish side continues regarding the fate of the Som submarine of the Russian Imperial Fleet, which sank in 1916 off the coast of Sweden, as well as the remains of its crew. Currently, the Swedish Government is considering the concept of lifting the submarine, developed by Russian specialists and transferred to partners in 2018, with its subsequent transfer to Russia.

The situation around the office-residential building of the Russian Trade Mission in Sweden, which has a diplomatic status, remains unresolved. In September 2014, in violation of international law, it was sold at an auction by the Swedish Recovery Service to the Swedish company LKO Fastighets AB in pursuance of the claim of the German businessman F. Zedelmeier against the Russian Federation.

Russia does not recognize the actions of the Swedish authorities in relation to the building of the Trade Mission and demands that the Swedish state fulfill its obligations to ensure the inviolability of the premises of the Russian diplomatic mission and the protection of its personnel, arising from the provisions of the Vienna Convention on Diplomatic Relations of 1961.

Cooperation between Russia and Sweden is progressing through multilateral regional formats in northern Europe - the Council of the Baltic Sea States , the Barents Euro-Arctic Council (BEAC) , within the framework of the Northern Dimension and the Russia-EU cross-border cooperation programs, as well as the Arctic Council , a two-year chairmanship in which will pass to the Russian Federation in May of this year.

An important factor in maintaining stability in the Baltic Sea region, in Northern Europe and the European continent as a whole is Sweden's traditional policy of non-participation in military alliances.

At the same time, however, the practical interaction of Stockholm with NATO is increasing , including the participation of Sweden in the military exercises conducted by the alliance and its members, and the provision of Swedish territory for such maneuvers. Statements about the presence of an alleged "Russian threat" are not stopped.

We have repeatedly expressed to our Swedish partners our readiness to discuss any security issues of concern to them. There were no substantive answers to these proposals.

For our part, we are convinced that in the North of Europe there are no issues requiring a military solution, let alone building up NATO's presence in this region, including in the immediate vicinity of the Russian borders”.