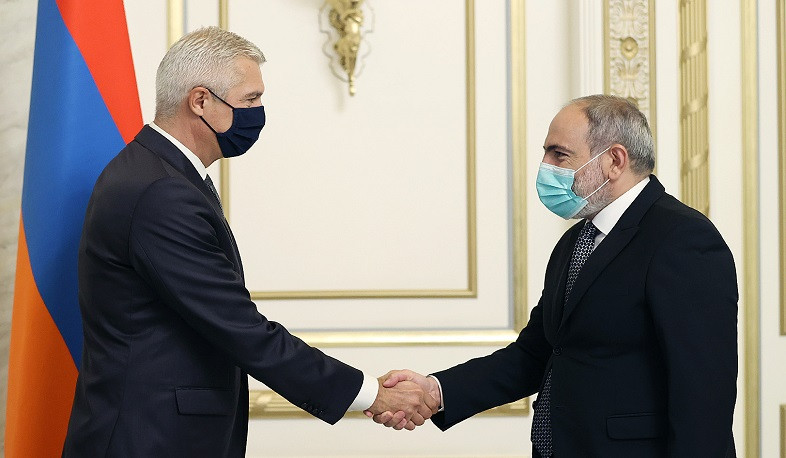 Prime Minister Nikol Pashinyan received a delegation led by the Minister of Foreign Affairs of Slovakia Ivan Korčok, who is on an official visit in Armenia.
The Prime Minister welcomed Mr. Korčok’s visit to Armenia and highlighted the continuous development of relations with Slovakia. The Prime Minister expressed satisfaction for that Slovakia shows interest in establishing peace and stability in the South Caucasus region.
In this context, Prime Minister Pashinyan referred to the situation created by the war unleashed by Azerbaijan against the Republic of Artsakh last year, its failure to fulfill the agreement on the return of Armenian prisoners of war, as well as the incursions of Azerbaijani forces into Armenia's sovereign territory. The Prime Minister presented the steps taken by the Armenian Government, Armenia's expectations from the international community and stressed the need to resume the negotiation process within the framework of the OSCE Minsk Group Co-chairs’ format.
Nikol Pashinyan also touched upon the Armenia-EU cooperation and stressed the importance of the assistance provided for the reforms aimed at the development and strengthening of democracy in Armenia.
The Foreign Minister of Slovakia noted that the Government of his country is interested in the development of multilateral cooperation with Armenia, particularly, Ivan Korčok emphasized the need to realize the great potential of cooperation in the fields of economy, including business relations, trade relations, information technologies. He conveyed the friendly greetings of the Slovak leadership to the Armenian people and the Prime Minister of Armenia. Mr. Korčok noted that he is impressed by the results of the early parliamentary elections of Armenia, and emphasized that despite the concequences of the pandemic and the war, Armenia has taken the path of development.
Mr. Korčok, underlined that Slovakia appreciates Armenia's efforts aimed at establishing stability and peace in the region and highlighted the comprehensive settlement of the Nagorno Karabakh conflict within the framework of the OSCE Minsk Group Co-Chairs. The Foreign Minister of Slovakia considered it necessary to take steps for strengthening confidence in the region and expressed his country's support for the OSCE Minsk Group Co-chairs’efforts.
The interlocutors exchanged views on the strengthening of democratic institutions in Armenia and the processes taking place in the region.
Views 15