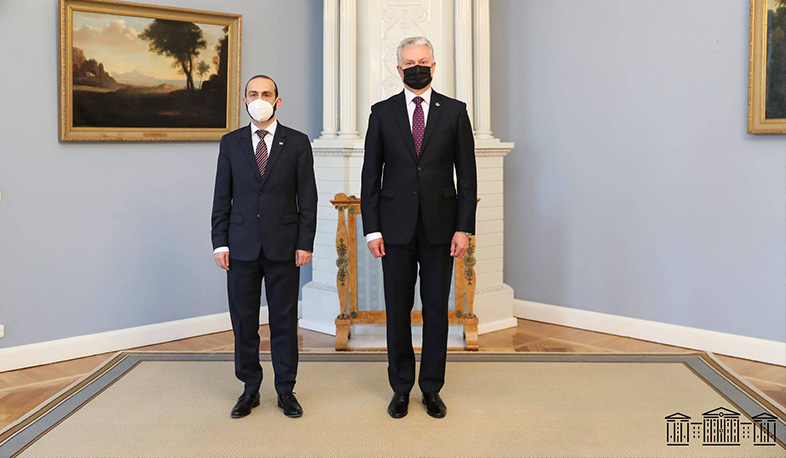 The Delegation of the RA National Assembly led by the NA Speaker Ararat Mirzoyan on an official visit to the Republic of Lithuania met with the President of Lithuania Gitanas Nausėda.

Welcoming the Armenian Delegation, the President of Lithuania has documented that this year marks the 30th anniversary of the establishment of the diplomatic relations between Armenia and Lithuania. Touching upon Armenia-European Union relations, he highlighted the ratification of the Comprehensive and Enhanced Partnership Agreement, which came into force on March 1 of this year. Nausėda conveyed his support words to Ararat Mirzoyan directed to the families of the deceased and suffered during the 44-day war.

Thanking the President of Lithuania for the reception, the Speaker of the National Assembly Ararat Mirzoyan, highly assessing the level of the dialogue existing between the two countries, has underlined that they are based on mutual respect and has expressed hope that in parallel with overcoming of pandemic the bilateral contacts will again activate. Presenting the current situation over the Nagorno Karabakh conflict, the Speaker of the Parliament of Armenia has underscored that it is necessary to resume the negotiations in the format of the OSCE Minsk Group Co-Chairmanship for affirming the right to Artsakh Armenians’ self-determination.