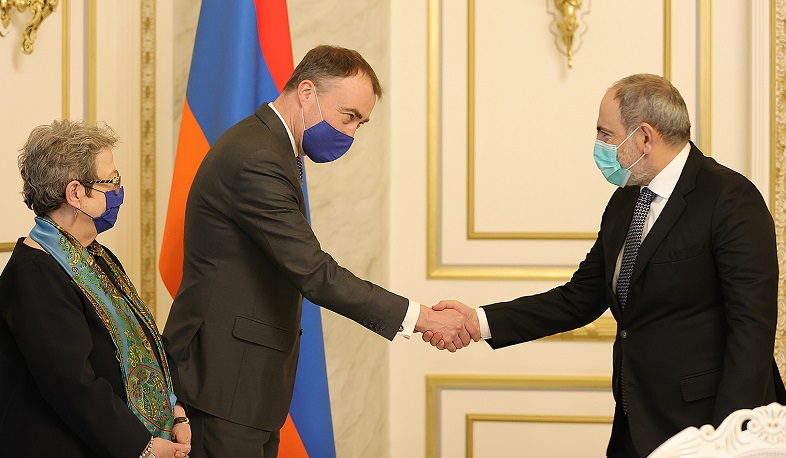 Armenia Prime Minister Nikol Pashinyan received EU Special Representative for the South Caucasus and the Crisis in Georgia Toivo Klaar. The Head of the EU Delegation to Armenia, Ambassador Andrea Victorin also participated in the meeting.
The Prime Minister assessed the Armenia-EU partnership as effective, with many programs implemented. Nikol Pashinyan emphasized the EU involvement in the infrastructure projects implemented in Armenia, particularly, informed that the Government has decided to start the construction of the Sisian-Kajaran south road section of ‘North-South’.
Touching upon the situation created by Azerbaijan after the war against Artsakh (Nagorno-Karabakh), the Prime Minister noted that the return of Armenian prisoners of war (POWs) (according to the 8-th point of the November 10, 2020 statement) remains a top priority for the Armenian side. However, Azerbaijan is trying to distort the interpretation of that point, delaying the return of POWs, hostages or other detainees. Pashinyan drew the EU Special Representative's attention to this important humanitarian issue and highlighted the substantive involvement of international partners, including EU institutions, in its solution.
The Prime Minister referred to the policy of anti-Armenianism officially encouraged by the top leadership of Azerbaijan, the obvious manifestation of which is the ‘park’ on the Artsakh war recently opened in Baku, the ‘demonstrations’ glorifying the war crimes committed by Azerbaijan there, the involvement of children in that policy. Pashinyan expressed deep indignation in this regard, considering it a serious challenge to the regional peace. Pashinyan emphasized that such behavior by a member state of the Council of Europe in the 21st century is inconceivable, which cannot be appropriate for the civilized world. The Prime Minister considered it necessary for the international community to respond adequately to Azerbaijan’s anti-human policy, emphasizing that this is the greatest basis for applying the principle of ‘Secession for Salvation’ in the case of Nagorno-Karabakh.
The EU Special Representative noted that the EU attaches great importance to the establishment of peace in the South Caucasus, and expressed concern over the challenges it poses, which do not make it possible to create an appropriate atmosphere. Toivo Klaar presented the impressions of his visit to the border provinces of Armenia and the meetings he had there to the Armenian Prime Minister. He emphasized the importance of protecting the rights of the population of border areas.
The Prime Minister also drew the EU Special Representative’s attention to the manipulation of Azerbaijan’s entry into Artsakh, the purpose of which is to obstruct the humanitarian activities of international organizations in Nagorno-Karabakh. In this regard, Pashinyan said it is important to bring Azerbaijan to a constructive field. Responding to the question, the EU Ambassador to Armenia noted that the EU would continue to implement humanitarian programs in Artsakh and provide assistance.
The parties exchanged views on the settlement of the Nagorno-Karabakh conflict. Prime Minister Pashinyan noted that the issue of the status of Nagorno-Karabakh remains unresolved, and that Armenia’s position in this regard is that negotiations should continue within the framework of the OSCE Minsk Group Co-chairing.
Pashinyan and Klaar touched upon other issues of regional importance, exchanged views on the opening of transport and economic infrastructures.
Views 136