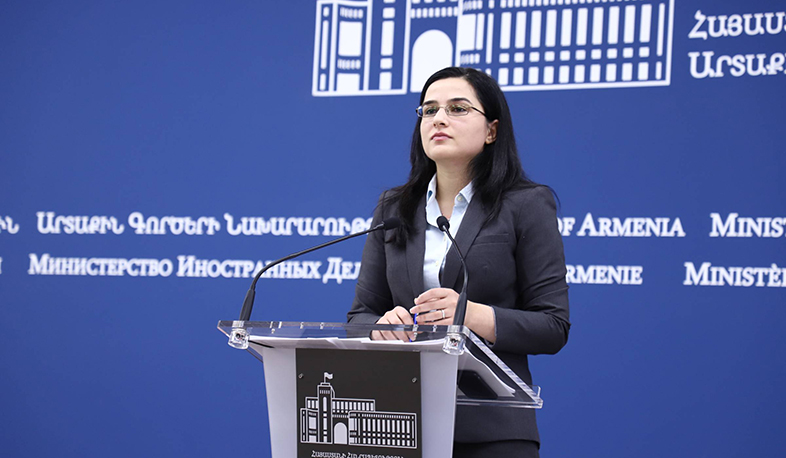 Aliyev’s rhetoric is a blatant challenge to international law, it in no way contributes to the stability of the region: Spokeswoman for Armenian Foreign Ministry

Anna Naghdalyan, Spokeswoman for the Ministry of Foreign Affairs of Armenia, answered the questions by journalists.
Question: Speaking at the conference of Economic Cooperation Organizations, the President of Azerbaijan noted that “the new transport corridor will pass through the historical territories of Azerbaijan, Zangezur, connecting the main part of Azerbaijan with its integral part, Nakhichevan Autonomous Republic, and Turkey”. Can you comment on this statement?
Answer: I stress once again that the Article 9 of the November 9 trilateral statement does not mention the establishment of a corridor.
With such a provocative statement, calling Zangezur an “Azerbaijani historical land” and making reference to an imaginary corridor, the President of Azerbaijan deliberately undermines the implementation of the November 9 and January 11 trilateral statements. Such rhetoric contradicts Azerbaijan's obligations; it is a blatant challenge to international law, it in no way contributes to the stability of the region and threatens all states in the region.
Question: The President of Azerbaijan reiterated that the conflict has been resolved and the UN Security Council resolutions have been implemented. How would you comment on that?
Answer: The statements of the President of Azerbaijan that Azerbaijan has resolved the Nagorno-Karabakh conflict by the use of force once again demonstrates who unleashed the war and who is leading the region through new challenges and further destabilization. As always, Azerbaijan distorts the provisions of the UN Security Council resolutions, while these same resolutions express their support for the Minsk Group peace process, headed by the Minsk Group Co-Chairs.
With his statements on the Nagorno-Karabakh peace process, the President of Azerbaijan contradicts the position of the international community, and first of all, the position of the OSCE Minsk Group Co-Chairmanship and Co-Chair countries, which clearly emphasizes the imperative of comprehensive settlement of the conflict. It is obvious to us that the attempt to suppress the right of the people of Artsakh to self-determination through the use of force cannot create grounds for the settlement of the conflict. The realization of the right of the people of Artsakh to self-determination and the elimination of the consequences of the war are the core elements of the peace process.
Views 1910