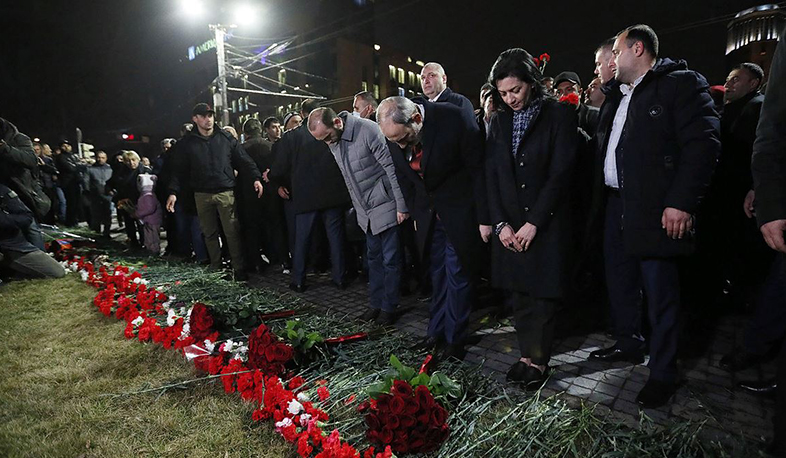 Prime Minister Nikol Pashinyan today convened a rally at Republic Square to commemorate the March 1 victims and outline ways of addressing the internal political situation in Armenia. The rally started to the sounds of Armenia’s national anthem. Nikol Pashinyan delivered a speech at the rally. Below is the transcript of Prime Minister Pashinyan’s remarks. Part 1 here.

But I still want to say the following. There is one goal behind our readiness to hold elections: no matter how many slogans, speeches, promises and pledges we make, we will not seek our own victory in elections; we will seek your victory in those elections, because you are to win in them. There should be no “winners and losers” in the Republic of Armenia; there should only be one power- that of the people. The other powers, the political forces, the Armed Forces, all other forces must unconditionally submit to the legitimate government elected by the people. There is simply no other option.
And therefore,
Long live freedom!
Long live the Republic of Armenia!
Long live us, and our children, who will live in a free and happy Armenia!
Long live Artsakh!
Long live the Armenians!
Long live our army, our heroic army, our soldiers, our heroic generals, our heroic officers, our victims, their relatives, their mothers, their fathers, their wives, and their children!
I bow to all of you. Please forgive us all our mistakes, if you can do so. Well, if you turn on the lights, let us all turn on the lights, offer them to the souls of our fallen soldiers and officers; let light fall on their souls.
Dear people,
The rally, a speech is a living organism, which makes that today I failed to refer to many other topics. We are facing several challenges. We have to deal with many issues, first of all the issues of captive and missing persons. But, to be honest, I do not find the public discussion of these issues expedient. The fact is that the current situation, yes, last week’s events caused some problems in that process, but I do not want to go into details. I just want the relatives of our captive brothers and sisters, the relatives of our missing brothers and sisters to be sure that we will not forget their concern even for a moment, not a second; we will never fail in our commitment to them. I want to say that your grief is in our hearts, all your bitter sorrows are in our hearts, and believe me, our hearts hurt with the same pain as yours.
There is an Armenian saying: “We do not come from the same place, but we are all from the same quarter.” Though in this case we are all from the same home, because Armenia is our home, and the people are my family. Yes, our motto should be upheld. There may be an argument in that family; there may be a trouble in that family; the family may fail; the family may lose, but after all, any family needs love, harmony, happiness and the power of unity. Violence should be ruled out in the Republic of Armenia for the sake of our martyrs. Settling political issues and resolving any other issue by force is to be ruled out in our country.
We have not ever had enemies inside Armenia, and we will never have any, which does not mean that law should not be enforced in our country, but legality will not be established in the Republic of Armenia as long as strong with the people’s will, we have not rooted out legislatively the practice of politicizing the judiciary and the Armed Forces. We could witness such a disgusting phenomenon in November-December, when some people tried to politicize the judiciary. All those who said that they were going to kill the Prime Minister and the government members were about to get indulgence, let alone the fact of not being arrested. People can be killed, but the truth cannot be killed. Those people will never again be in power in our country, because power is up to the people in Armenia, it only and exclusively belongs to the people.
And again, dear people, I suggest that we end our gathering with a march. Those gathered on Baghramyan Avenue are our relatives, our sisters are our brothers. Yes, they say bad things about us, but they are our sisters and brothers. It does not matter what they are saying.
I suggest walking the following route: we will walk along Mashtots Avenue, then we will go up Koryun Street; we will go down Abovyan Street; we will lay flowers at the statue of Myasnikyan in memory of the victims of March 1; we will say goodbye to each other and we will get back to our daily routine. And most importantly, please believe in the strength of the people. No one can stand against the people’s power whether by tank, by plane, or by nuclear weapons. People constitute an invincible force; people are powerful; the people are proud, and the people will triumph. Thank you all.”
The rally led by Prime Minister Pashinyan was concluded with a march in memory of the March 1 victims. Together with other participants in the procession, the Premier laid flowers at Myasnikyan’s statue and paid tribute to the victims.
Views 79