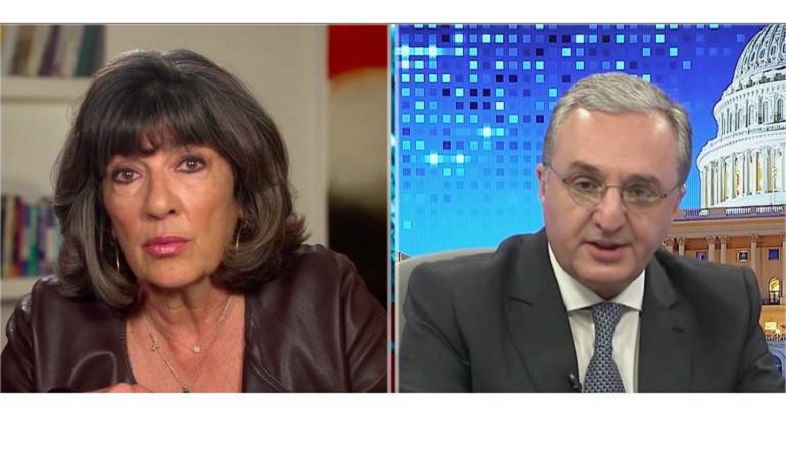 The interview of Armenian FM Zohrab Mnatsakanyan to CNN

Christiane Amanpour: Today, the Foreign Ministers of both countries met with the US Secretary of State Mike Pompeo, in a bid to seal another ceasefire. Well, joining me now, fresh from that meeting, in an exclusive interview, is the Armenian Foreign Minister Zohrab Mnatsakanyan. Welcome to the program. Can I just ask you - what message Mike Pompeo, the Secretary of State, gave to you, is there any hope that there will be a ceasefire?

Zohrab Mnatsakanyan: Thank you very much for having me. The message from Secretary Pompeo is the message of the three Co-Chair countries: Russia, France, and the United States, who have been the internationally recognized mediating format to find a peaceful resolution to this conflict, and the message is one: the war has to stop, the aggression has to stop, ceasefire has to be established, and then we’ll move on. That was the message that we share very much and we support very much.

Christiane Amanpour: Okay, so you say that. Your counterpart, who, of course, we did invite on this program, wasn’t able to join us, Foreign Minister of Azerbaijan Jeyhun Bayramov, said “the only pathway to peace is based on the UN Security Council resolutions and respect for international law. The illegal Armenian occupation must end and Azerbaijan’s territorial integrity restored.” Are you prepared to make that concession?

Zohrab Mnatsakanyan: We are not talking about concessions, we’re talking about establishing ceasefire now and returning to the peace process. Now, when it comes to the future of Nagorno-Karabakh, this whole conflict is about people, about our compatriots in Nagorno-Karabakh. The Armenians, who have been resisting the subjugation to the domination of Azerbaijan. This has been the whole story. It is all about our people, who are pounded with bombs and rockets and missiles. The existential physical security of our compatriots has been the core of this problem, has been the core of the issue. And what we have been insisting upon is that we find a peaceful resolution to this conflict, in which the security of our compatriots finds its expression, and that the status of Nagorno-Karabakh, the right to self-determination of our compatriots is a very basic principle recognized by the international community, and that has to be delivered now.

Our people in Nagorno-Karabakh will live in freedom, in dignity, in safety, and in security. That’s the core issue of this conflict. It’s about people. It’s not the conflict. It’s the real lives of people. As we were talking, when we were here in Washington D.C., when we were trying to further reinforce the message of ceasefire, the message of going back to the peaceful resolution, I’ve been receiving their messages when coming out of the meetings, messages from Armenia, from Nagorno-Karabakh that the civilian settlements, the towns of Stepanakert, Hadrut, Martuni, have again been the target of heavy missile shelling by the Azerbaijani forces. The civilians are dying. The civilian, the humanitarian situation is very dire. And this is not going to happen.

Christiane Amanpour: So, I want to ask you this: you’ve just called Nagorno-Karabakh ethnically belonging to your people there. But the United Nations calls Armenians an occupation force. Look, in 1993 there were Security Council resolutions demanding the immediate withdrawal of those occupying forces, as they said. In 2008, the UN General Assembly adopted a resolution on the issue in which it called for exactly the same thing. And the 2008 General Assembly reaffirmed Azerbaijan’s territorial integrity. So, this obviously has to happen through negotiation. You can see it pointed out there in black and white and yet you can also see that your people have a right to safety and to their own rights. Is there any way you, because you’re very firm about what you’re saying, is there any way that you and the Azerbaijanis can get together and resolve this? Because all the ceasefires that have been put in so far have just collapsed after a day or so.

Zohrab Mnatsakanyan: Now, excellent point you are making. As we are going back to 1993, then there is an important point to make about that. Between 1992 and 1993 we had a very dangerous situation, when there was a narrow strip left to the Armenians in Nagorno-Karabakh with the rest of the territory occupied by the Azerbaijani forces; the population from those territories ethnically cleansed and driven out of their territories. The subsequent developments have been such that the Armenians in Nagorno-Karabakh were capable of defending themselves: very resolute to defend their lives. And they have created a security belt, which today has been basically a demonstration that unless there was a security belt the Nagorno-Karabakh population might have been again facing this ethnic cleansing as it has always been looming over them. We are negotiating in good faith to find a way in which the right to self-determination of our compatriots in Nagorno-Karabakh will find its manifestation, its resolution. That is our commitment and we will continue to work towards achieving this objective.

Christiane Amanpour: Okay, so that is your commitment, you are telling us now in full international platform, in full platform across the United States, but the problem is that your Prime Minister was there in, I believe it was August, actually last year in August, and he was behaving in a very nationalistic way, he used, perhaps its his language, but he used the Armenian name for Nagorno-Karabakh and he repeatedly led crowds chanting “unification with Armenia.” Is that your policy?

Zohrab Mnatsakanyan: This is a twist we have been addressing and dealing with over the past year. A twist and a deceptive way of turning the words on their head. The Prime Minister has been talking about the role of Armenia in securing, guaranteeing the security of our compatriots in Nagorno-Karabakh. There is no other force in this world who can do or who has been doing that. The Prime Minister has been talking about the way in which Armenia is developing, Armenia is reforming and he was reaffirming that Armenia will not be indifferent to the fate of its compatriots in Nagorno-Karabakh. The Prime Minister has been talking about the compromise-based peaceful resolution consistently over these two years and in that speech as well. So, these words are taken out of context and there is disregard to the fundamental point that the solution is compromise-based and it is peaceful. And that is the message from Armenia that has been consistent over two years.

Christiane Amanpour: That is what people want to hear: peaceful, compromise, diplomacy, and not fighting as we see right now. So, are you telling me that the official position of Armenia is not to have Nagorno-Karabakh unified with Armenia?

Zohrab Mnatsakanyan: We are saying about the right to self-determination of the people of Nagorno-Karabakh in which their free expression without limitations will be achieved. Now, today’s situation shows that there is no way for subjugation, there is no way for domination, there is no way that we will have the risk of ethnic cleansing of our compatriots again looming over them, that the people will decide their fate, and they will decide for their independence and that has to be respected. That is the way to solve it. So far as the compromise is concerned, we have to be very clear: no concession, no maximalist approach that we have been hearing from Azerbaijan. They have to stop there.

Christiane Amanpour: Foreign Minister, thank you very much for joining us. Again, I had the hope to have the Azerbaijani Foreign Minister as well, he wasn’t able to join us today.