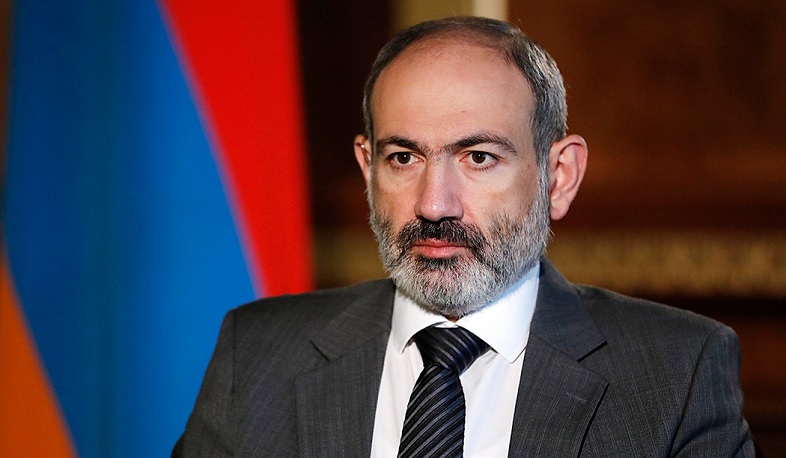 PM: “This is being done as part of Azerbaijan’s genocidal policy”

The RA Prime Minister Nikol Pashinyan has given an interview to France 24. Below is the transcript of the interview.

France 24 - Hello and welcome to this edition of the France 24 interview. We are joined by the Prime Minister of Armenia, Mr Nikol Pashinyan.

Mr. Prime Minister, thank you so much for agreeing to this France 24 interview in what surely are very difficult times for the region you are living in. I would like to bring up a map that you may not agree with, although it is widely circulated in the international arena. It shows your country Armenia on the left, Azerbaijan the neighboring country on the right. And what is looking like Azerbaijani territory, the disputing region of Nagorno-Karabakh which actually declared its independence back in the 90s which not a single member of the United Nations has so far recognized, not even your country, Armenia.

Recently we witnessed a very hard approach to this issue. You went to Nagorno-Karabakh and declared that the Republic of Artsakh which is another name for the Nagorno-Karabakh region is Armenia. Here again, Mr Prime Minister, not a single member of the United Nations has agreed with that statement.

Prime Minister Nikol Pashinyan - Unfortunately I cannot see the map which you posted and I cannot make any comment. As regards the statement which you refer to, it is important to know the history of the issue of Nagorno-Karabakh because in your statement you said “contested territory.”

Back in 1988 in the Soviet Union where there was a process of “perestroika” and democratization, the people of Karabakh were inspired by Gorbachev's reforms. They decided to restore their rights - rights that had been violated in the period of formation of the Soviet Union when as a result of Stalin's arbitrary decision, Nagorno-Karabakh with over 80% Armenian population had been annexed to Soviet Azerbaijan.

And so, in 1988 the Parliament of the Autonomous Republic of Nagorno-Karabakh adopted a decision on unification with Armenia. This was an absolutely peaceful process. I wish to highlight that back then the movement was perceived as a process of democratization in the Soviet Union.

Many in Europe were saying that the Karabakh movements ushered in the collapse of the Berlin Wall. In response to this peaceful decision in Karabakh, the Soviet Union and Soviet Azerbaijan exerted violence carrying out killings of Armenians in the towns of Sumgayit and Baku. And that is how the conflict came about.

France 24 - Mr. Prime Minister, you mentioned the right of Nagorno Karabakh to independence. I would like to refer to the existing regulations within the framework of international law. In particular, the UN General Assembly has adopted a number of resolutions concerning Nagorno-Karabakh. You may know that it has a mention of “occupied territories,” which implies that those territories have been occupied.

Prime Minister Nikol Pashinyan - Who occupied them? If you look closely at these resolutions…

France 24 - For instance, Resolution 62243 mentions the situation in the occupied territories of Azerbaijan; obviously Azerbaijan is not occupying its own territories.

Cities, villages, settlements were bombed, people did not have the opportunity to live in their apartments for about 2 years. And since there was no international power to stop this process, the people of Nagorno-Karabakh formed self-defense forces, which managed to protect them against deadly shelling and rockets.

If you look closely at the UN Security Council resolutions, you will see that they clearly state that Azerbaijan violated the ceasefire agreement, eventually lost some territories as a result of strong counteraction carried out by Nagorno-Karabakh’s self-defense forces, the local Armenian forces.

Even today, Azerbaijan does not observe the ceasefire; this can lead to serious consequences for the region as a whole, including Azerbaijan.

France 24 - Mr. Prime Minister, I would like to refer to the rhetoric used with regard to Turkey. You say that Turkey has been directly and openly supporting Azerbaijan through diplomatic and military means. You insist that Turkey has genocidal aspirations against the Armenian people. The support coming from your international partners, including Russia, is not so great. Do you think that the world does not understand the problem properly or is indifferent to it?

Prime Minister Nikol Pashinyan - First of all, let me note that many countries, including the OSCE Minsk Group Co-Chairs, have already acknowledged that Turkey is involved in the hostilities, and that Turkey has provoked these hostilities.

Second, many representatives of the international community, countries, states - Russia, Iran, France, and other countries - admit that Turkey has transferred mercenaries from Syria to Azerbaijan to launch a large-scale offensive against Nagorno-Karabakh.

I clearly say that, yes, Turkey is back to the South Caucasus 100 years later to continue its genocidal policy against the Armenians. But it has a very specific pragmatic goal, because the Armenians in the South Caucasus are the last barrier on Turkey’s way to materializing its expansionist policy to the north, east and south-east.

And all this must be viewed in the context of the policy that Turkey is pursuing in the Mediterranean, in Syria, in Iraq, in its relations with Greece, Cyprus, and the world must face this fact. I have said that if this fact is not properly assessed, Europe will have to see in Turkey at Vienna.

France 24 - Mr. Prime Minister, let me ask you one more question. Asked about the killings of civilians, President Ilham Aliyev recently accused Armenia of deploying military equipment in close vicinity of civilian settlements, which he says has led to civilian casualties. What do you feel about it?

Prime Minister Nikol Pashinyan – A video filmed by international media was posted of late which showed how Nagorno-Karabakh’s capital Stepanakert was being shelled. While closely watching those footages I noticed that there was neither military infrastructure, nor any military personnel stationed in those sections of Stepanakert that had been shelled. This is being done as part of Azerbaijan’s genocidal policy. Aliyev and Azerbaijan, just as it was the case before, continue with the policy of genocide against the Armenians of Nagorno-Karabakh, which is manifested by indiscriminate killings, deportations and ethnic cleansing. International media outlets have provided numerous proofs that the following is happening in Stepanakert: residential buildings are just being demolished to make them unfit for habitation.

And this is why we say that the Armenians of Nagorno-Karabakh are facing an existential threat. There is only one solution to this issue: the international community must recognize Nagorno- Karabakh’s right to self-determination under the principle of “remedial secession.” Artsakh cannot be left under Azerbaijan’s control. It is simply out of the question; the international community must recognize the independence of Nagorno-Karabakh. By the way, I am glad that this process has already started in Europe at the level of local self-governments, city councils. We hope that it will spread ahead.

France 24 - Mr. Prime Minister, a last question since we have too little time left. You enjoy unprecedented reputation in your country. The international community overwhelmingly welcomed the assumption of your government. Most recently, in 2018, as a result of a peaceful process known as the Velvet Revolution, you came to power. Why not use your authority and popularity in order to engage in meaningful negotiations, which, as you know, implies a compromise - territorial concessions, which is a much better option than the deaths and destruction we can see today and that we have witnessed for a few decades now?

Prime Minister Nikol Pashinyan - I tried to do so. I offered a compromise, but during the negotiation process it becomes obvious that Azerbaijan, and now Turkey, does not want to give up its policy of genocide. Yet again, I insist that this issue has no other solution than the application of the principle of “remedial secession,” because strong with the support of Turkey and international terrorists, Azerbaijan has set itself the task of committing genocide against the Armenians of Nagorno-Karabakh.

France 24 – Could you please be more specific on the concessions you are ready to make? I would ask you to refer to the so-called buffer zone in that context.

Prime Minister Nikol Pashinyan - Of course, I can be more specific. When I became Prime Minister, I first suggested the following formula. There has been a lot of talk about concessions, but we must first have a concept for the settlement of the issue. Anyone believing that the Armenian side should make unilateral concessions is just talking about the capitulation of the Armenian side. This is not a settlement. I suggested that we first trued to understand the settlement formula at the conceptual level.

France 24 - Thank you, Mr. Prime Minister, we would like to ask you more questions. But, unfortunately, time does not allow it.